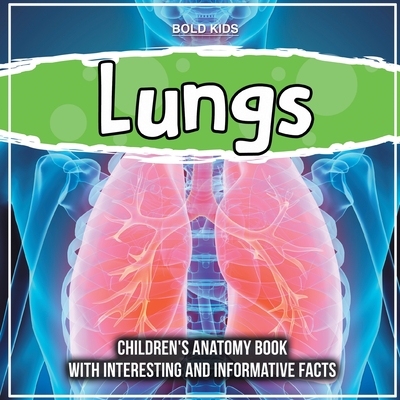 
Not On Our Shelves—Ships in 1-5 Days
(This book cannot be returned.)
Lungs Facts

Did you know that the Lungs are an important organ in the human body? Most people already know that they breathe air. On average, we breathe about 13 pints of air per minute. However, did you know that your lungs are not symmetrical? They are designed differently on either side of your chest, with the right being slightly larger than the left. These differences are related to how your heart works and the way your body processes air.

The lungs are pyramid-shaped organs in the chest, located in the thoracic cavity. They are connected to the trachea by bronchi on both sides. The lungs are covered with pleura, which extends downward to form the pulmonary ligament. The lungs are surrounded by pleurae, which line the surfaces of the ribs and diaphragm. They contain bronchi, pulmonary vascular system, and phrenic nerve. They are also divided in two sections by the cardiac notch, located on the left lung.

Lungs are located in the chest

The lungs process air as one of the central organs of the human respiratory system. Humans inhale about two and a half gallons of air daily, allowing them to breathe oxygenated blood into every part of the body. These organs are suspended in a framework of elastic fibers. The human respiratory system is made up of five major parts. Each part is analyzed individually by examining the way air passes through them.

They remove carbon dioxide from the blood

When you breathe, your blood carries oxygen. Oxygen is essential for the energy-generating processes in your cells. When your blood passes through the heart, it is distributed through a network of increasingly branched blood vessels. These vessels branch into capillaries and arterioles. During the process, oxygenated red blood cells pass through these capillaries. As they pass, they gradually become deoxygenated and wastes are transferred to the capillary blood.

They float on water

Human lungs are the only organ in the body that floats on water. The lungs are made up of hundreds of millions of tiny air sacs, known as alveoli, that are responsible for the exchange of carbon dioxide in the blood with oxygen. Compared to other body organs, the lungs are much lighter. The adult lungs are estimated to be the size of a tennis court when unfolded. Lungs float on water because they are made of air, a fact that has been scientifically proven to be true 98 percent of the time.

They are organized in a systematic way

The lung is an organ of the respiratory system and has a sponge-like consistency. The air reaches the lungs through the alveoli, which have millions of air sacs. The alveolar walls have an intricate network of capillaries, which helps the oxygen and carbon dioxide diffuse from the air into the blood. During breathing, oxygen is transported from the alveoli to the blood, while carbon dioxide is exhaled through the bronchioles.