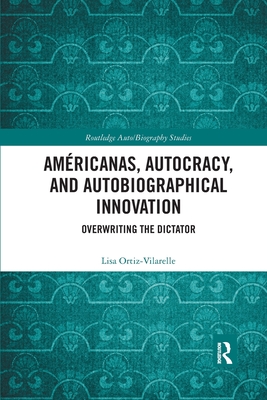 Overwriting the Dictator is literary study of life writing and dictatorship in Americas. Its focus is women who have attempted to rewrite, or overwrite, discourses of womanhood and nationalism in the dictatorships of their nations of origin. The project covers five 20th century autocratic governments: the totalitarianism of Rafael Trujillo's regime in the Dominican Republic, the dynasty of the Somoza family in Nicaragua, the charismatic, yet polemical impact of Juan and Eva Per n on the proletariat of Argentina, the controversial rule of Fidel Castro following Cuba's 1959 revolution, and Augusto Pinochet's coup d' tat that transformed Chile into a police state. Each chapter traces emerging patterns of experimentation with autobiographical form and determines how specific autocratic methods of control suppress certain methods of self-representation and enable others. The book foregrounds ways in which women's self-representation produces a counter-narrative that critiques and undermines dictatorial power with the depiction of women as self-aware, resisting subjects engaged in repositioning their gendered narratives of national identity.

Lisa Ortiz-Vilarelle (PhD, English, Wayne State University, 2000) is Professor of English at The College of New Jersey. Her work appears in European Journal of Life Writing, a/b: Auto/Biography Studies, Life Writing Annual, and Life Writing . Her research also appears in critical collections and anthologies, including Inhabiting La Patria: Identity, Agency, and Antojo in the Work of Julia Alvarez, edited by Emily Hipchen and Rebecca Harrison (2014). She was recently awarded the annual Hogan Prize (2018) by the editors of a/b: Auto/Biography Studies for recognition of an outstanding essay published in the journal. She has been a summer fellow at the Cornell School of Criticism and Theory (1998) and a visiting scholar in the Center for Biographical Research at the University of Hawai'i, at Manoa (summer 2018) and in the Departments of Modern Languages and Cultural Studies and English and Film Studies at the University of Alberta, Edmonton (2020). She currently serves as Book Reviews Editor for a/b: Auto/Biography Studies.