Making a Scene in Documentary Film: Iconic Filmmakers Discuss What Works and Why (Paperback) 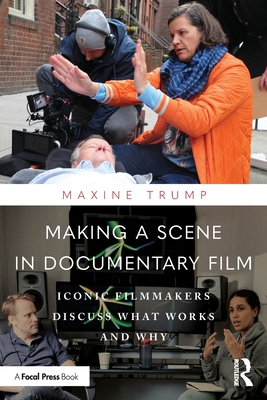 Making a Scene in Documentary Film: Iconic Filmmakers Discuss What Works and Why (Paperback)

This collection of iconic interviews helps demystify the documentary filmmaking process by deconstructing the most relevant and important scenes in some of documentary's most well-known films. It offers concrete, real-world examples of the situations and decisions that filmmakers navigate. We go behind-the-scenes with the creators to learn the methodologies and approaches these directors, cinematographers, editors and sound recordists have taken to bring these amazing documentaries to life.

What makes a great scene? Why are they so important in the construction of a great film? The interviews included offer insights from the directors of the award-winning (Oscar Academy Awards, Sundance and many more) Truffle Hunters, My Octopus Teacher, Collective, Knock Down The House and Trapped. The cinematographer of RBG, Julia and Fauci. The editor of Time and sound designer of Tiger King. BDA award-winning documentary filmmaker and esteemed Sundance advisor, Maxine Trump goes in depth with each filmmaker, asking about their creative process and why these scenes made such a deep impression on themselves and their audience. Was it the cinematic style, the dynamic dialogue, the magic of observational filmmaking, the story beat or a surprising turning point?

This technical but creative and accessible resource is suitable for documentary filmmaking students and aspiring directors, producers, editors, and cinematographers in nonfiction film, with each interview offering a fresh perspective to the emerging or professional filmmaker and audience alike.
Maxine Trump is a Sundance advisor, has lectured at Yale and the University of the Arts London and teaches documentary filmmaking at the New York Film Academy . She has won multiple BDA awards as a director for her work on numerous commercial projects for Network TV and agency clients. She went on to direct documentaries for Sundance, TNT, BBC, Discovery, PBS etc. Her previous feature film Musicwood was a New York Times Critics' pick, festival award winner and played on TV and in theaters around the world. Her latest film, To Kid Or Not To Kid, was released in theaters and on TV worldwide in June 2020.