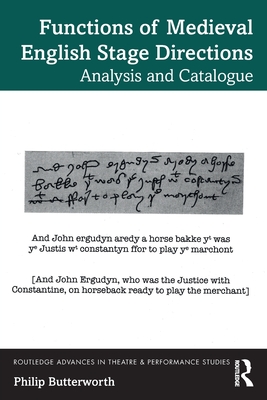 When we speak of theatre, we think we know what a stage direction is: we tend to think of it as an authorial requirement, devised to be complementary to the spoken text and directed at those who put on a play as to what, when, where, how or why a moment, action or its staging should be completed. This is the general understanding to condition a theatrical convention known as the 'stage direction'. As such, we recognise that the stage direction is directed towards actors, directors, designers, and any others who have a part to play in the practical realisation of the play. And perhaps we think that this has always been the case. However, the term 'stage direction' is not a medieval one, nor does an English medieval equivalent term exist to codify the functions contained in extraneous manuscript notes, requirements, directions or records. The medieval English stage direction does not generally function in this way: it mainly exists as an observed record of earlier performance. There are examples of other functions, but even they are not directed at players or those involved in creating performance.

More than 2000 stage directions from 40 or so plays and cycles have been included in the catalogue of the volume, and over 400 of those have been selected for analysis throughout the work.

The purpose of this research is to examine the theatrical functions of medieval English stage directions as records of earlier performance. Examples of such functions are largely taken from outdoor scriptural plays. This book will be of great interest to students and scholars in theatre, medieval history and literature.

Philip Butterworth is a visiting scholar in medieval theatre at the University of Leeds, UK.