The Effect: An Introduction to Research Design and Causality (Paperback) 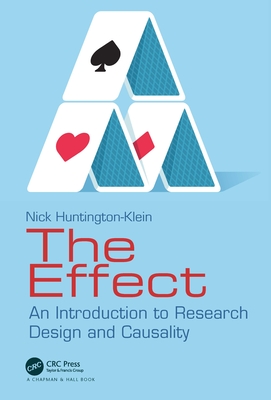 The Effect: An Introduction to Research Design and Causality (Paperback)

The Effect: An Introduction to Research Design and Causality is about research design, specifically concerning research that uses observational data to make a causal inference. It is separated into two halves, each with different approaches to that subject. The first half goes through the concepts of causality, with very little in the way of estimation. It introduces the concept of identification thoroughly and clearly and discusses it as a process of trying to isolate variation that has a causal interpretation. Subjects include heavy emphasis on data-generating processes and causal diagrams.

Concepts are demonstrated with a heavy emphasis on graphical intuition and the question of what we do to data. When we "add a control variable" what does that actually do?

Nick Huntington-Klein is a professor of economics at Seattle University specializing in the study of the education system and applied econometrics. He is known as someone who can clearly explain complex topics in econometrics, and his teaching materials have been shared online tens of thousands of times. To his great anguish, his toddler daughter refuses to learn about sampling variation and would rather listen to that one Moana song on repeat.