A Practical Guide To The Forensic Examination Of Hair: From Crime Scene To Court (Paperback) 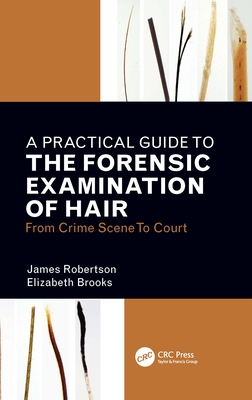 A Practical Guide To The Forensic Examination Of Hair: From Crime Scene To Court (Paperback)

A Practical Guide to the Forensic Examination of Hair: From Crime Scene to Court presents current best practices and methodologies for forensic microscopists and trace evidence analysts, in addition to lawyers and judges, to detail the utilisation of hair evidence in court cases.

The 30-year evolution and development of forensic DNA analysis has placed very heavy focus on its value in identifying the source of biological materials in other evidence. In addition to some recent controversies over the reliability of hair evidence and analysis, the question arises: what to do with hairs and hair evidence presented in court cases? The reality is that this is a fairly common form of evidence present at, and relevant in, many types of crime scenes and scenarios. Are we to simply ignore hairs as an evidence type?

This book outlines the case for hair evidence's continued relevance as a valuable biological source that can contribute to assisting in answering questions of identity and questions of what happened or the criminalistic potential of hairs. The authors present a four-level approach to the case management of recovered hairs. This system, which can be incorporated into contemporary forensic practice, stresses the need for thorough and systematic recording of hairs and their microscopic features and on the need to focus on differences to effectively triage recovered hairs. The approach focuses on the efficient and accurate selection of hairs for nuclear and mitochondrial DNA analysis while addressing the criminalistic potential of hairs.

Outlines the latest advances in the collection and forensic hair fibres, and includes full-colour illustrative figures throughout.

Covers the advances in DNA extraction and analysis of hair samples including nuclear and mt-DNA testing. Addresses all forensic aspects of hair evidence including recovery, collection, examination, analysis, testing and presentation of such results in court.

A Practical Guide to the Forensic Examination of Hair is a practical reference written for practitioners and promotes the need for quality assurance measures, process standardization and proficiency testing to ensure the scientific reliability of hair examination.

The book discusses how to interpret and report on hair findings to impart to investigators, and to the broader legal system, the appropriate weight that should be attributed to hair findings. It provides invaluable methodologies and guidelines that reinforce the ongoing value and validity of hair examinations.

James Robertson graduated from the University of Glasgow in 1972 with a BSc(hons) in Agricultural Botany and in 1976 with a PhD in plant physiology. Following a short period as a postdoctoral researcher in London he entered the world of forensic science as a lecturer at the University of Strathclyde where he taught in the Master of Forensic Science from 1976 to 1985. James worked on a Royal Commission in South Australia in 1983 and in 1985 migrated to Australia in 1985 to work as a senior forensic scientist in Adelaide before joining the Australian Federal Police (AFP) in 1989 as the first Director of forensic science. During the next 20 years, he established the AFP forensic group as a world respected forensic organization. Despite occupying a senior managerial role, James always maintained his case work competency as a fiber and hair examiner--and his interest in all things academic! Hence it was no surprisem on his retirement from the AFP, that he returned to an academic role as a Professorial Fellow at the University of Canberra (UC) and Director of the National Centre for Forensic Studies (NCFS). James 'retired '(again) in 2019 but remains as a Professor Emeritus at UC. James has authored co-authored close to 200 academic papers and edited or co-edited several books on forensic science including books on fibres and hairs. He is Editor Emeritus of the Australian Journal of Forensic Sciences and a Life Member of the Australian Academy of Forensic Sciences (AAFS) and the Australian and New Zealand Forensic Science Society (ANZFSS) having served both organisations as either President or Vice President. James has chaired all of the major forensic advisory groups in Australia during his career. His contributions to forensic science have been formally recognised with the Public Service Medal (PSM), a Member of the Order of Australia (AM) and Doctor of the University of Canberra. James is a Fellow of the Royal Society of New South Wales (FRSN). James continues his active interest in, and passion for, the forensic aspects of trace evidence, criminalistics and especially fibres and hairs.Elizabeth Brooks graduated with a BA in Biogeography from Australian National University, Australia in 1978, and a Master of Applied Science from the University of Canberra, Australia in 2007. Prior to working at the Australian Federal Police (AFP) in October 2000, Elizabeth worked for twenty-two years at the Commonwealth Scientific and Industrial Organization, Division of Entomology providing microscopy and immunohistochemistry expertise for their Biotechnology Program. At the AFP, as part of the biological criminalistics team undertaking DNA analysis Elizabeth's interests focused largely on forensic hair examination. Over the years, she has authored several scientific journal articles and book chapters. In retirement, Elizabeth maintains her interest and expertise in hair examination, providing hair training courses and technically reviewing cases for Australian jurisdictions, as requested.