Striking Back: Overt and Covert Options to Combat Russian Disinformation (Paperback) 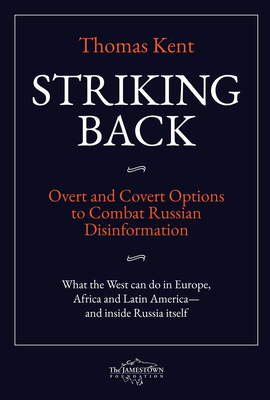 Striking Back: Overt and Covert Options to Combat Russian Disinformation (Paperback)

Disinformation by Russia and its allies has increased sharply in the past decade, but Western responses have been weak and uncoordinated. Most democratic countries have relied on defensive measures, such as media literacy classes and pressure on social networks to delete Kremlin-controlled accounts. Thomas Kent, the former president of Radio Free Europe/Radio Liberty, proposes an energetic new strategy: aggressive messaging to combat Russian information operations, while promoting the values of democracy that too many in the West have lost faith in. Focusing on Russian operations in Europe, Africa and Latin America, Kent describes the reluctance of many Western governments to confront Kremlin disinformation. Some are afraid of Kremlin retaliation, while others fear becoming "propagandists" themselves. Kent, a specialist on communication ethics, delves into the difference between propaganda and aggressive promotion of the truth. Kent also describes the little-publicized army of anti-disinformation warriors, independent of governments, who are already at work confronting Russian trolls and even doxing Russian soldiers. Along with independent journalists and fact-checkers, these activists represent a significant potential threat to Russian disinformation. But the groups are small and their funding is haphazard.

Striking Back presents concrete recommendations for aggressive messaging to combat Russian disinformation, including specific themes to emphasize, the best vehicles for getting messages across, and how to help those already engaged in the struggle. It also recommends stepped-up communication to Russia's own citizens, and proposes strategies in case the Kremlin ever manages to separate the Russian internet from the rest of the online world. Striking Back also assesses the ethics and practicality of covert information activities by Western nations. Thomas Kent goes beyond depicting Russian operations to propose steps that Western governments, foundations and activists can take now to confront them.

Thomas Kent is a specialist in Russian affairs, journalism ethics and the dangers of disinformation. He is a Senior Fellow of The Jamestown Foundation and a former president of Radio Free Europe/Radio Liberty. He teaches at Columbia University and consults for media, government and civil society organizations on journalistic ethics and combating propaganda. He was Moscow and Tehran bureau chief for The Associated Press, head of AP's international news division and standards editor, responsible for the ethics of AP news. A Russian Studies graduate of Yale University, he has addressed professional forums in 22 countries. He speaks French, Russian and Spanish.