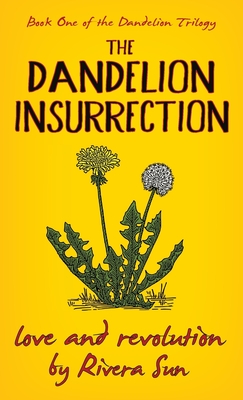 This is book number 1 in the Dandelion Trilogy series.

In a time that looms around the corner of today, in a place on the edge of our nation, it is a crime to dissent, a crime to assemble, a crime to stand up for one's life. Despite all this - or perhaps because of it - the Dandelion Insurrection appears . . .

Under a gathering storm of tyranny, Zadie Byrd Gray whirls into the life of Charlie Rider and asks him to become the voice of the Dandelion Insurrection. With the rallying cry of life, liberty, and love, Zadie and Charlie fly across America leaving a wake of revolution in their path. Passion erupts. Danger abounds. The lives of millions hang by a thread. The golden soul of humanity blossoms . . . and wonders start to unfold

Author Rivera Sun creates mythic characters from everyday people. She infuses the story of our times with practical solutions and visionary perspectives, drawing the reader into a world both terrifying and inspiring . . . a world that can be our own

"Close your eyes and imagine the force of the people and the power of love overcoming the force of greed and the love of power. Then read The Dandelion Insurrection. In a world where despair has deep roots, The Dandelion Insurrection bursts forth with joyful abandon."-- Medea Benjamin, co-founder of CodePink
"I love this book It beautifully captures the revolution of love that is sweeping the globe, told as an epic novel that will set your heart on fire. A rare gem of a book, a must read, it charts the way forward in this time of turmoil and transformation. If you loved Occupy Love, you will love The Dandelion Insurrection "-- Velcrow Ripper, Canadian Academy Award (Genie) winner, director of Occupy Love
"This novel will not only make you want to change the world, it will remind you that you can." -- Gayle Brandeis, author of The Book of Dead Birds, winner of the Bellwether Prize for Socially Engaged Fiction
"THE handbook for the coming revolution "-- Lo Daniels, Editor of Dandelion Salad
"The Dandelion Insurrection is an updated, more accurate, less fantastical Brave New World or 1984."-- David Swanson, journalist, author, peace activist
"The Dandelion Insurrection is a prayer seven billion hearts strong and counting."-- Megan Hollingsworth, Founder of Extinction Witness
"Rivera Sun's The Dandelion Insurrection takes place in a dystopia just a hop, skip and jump away from today's society. A fundamentally political book with vivid characters and heart stopping action. It's a must and a great read."-- Judy Rebick, activist and author of Occupy This
". . . a beautifully written book just like the dandelion plant itself, punching holes through the concert of corporate terror, and inviting all to join in the insurrection."-- Keith McHenry, co-founder of the Food Not Bombs Movement