The Reasonings of Buju Banton, Bounty Killer & Sizzla (Behind the Music Tales #8) (Paperback) 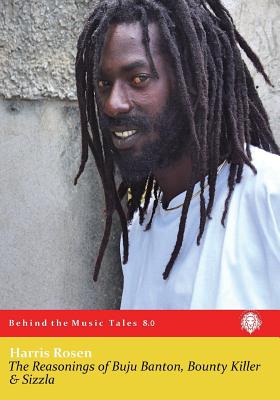 The Reasonings of Buju Banton, Bounty Killer & Sizzla (Behind the Music Tales #8) (Paperback)

An engaging literal account of how three prodigious talents ply and impact a nation of millions with their reactionary music.

Behind the Music Tales is a series which captures the mood and feel of the energy that surged through music in the 90s and 2000s. It presents exclusive original interviews as an honest record, directly from authentic creative forces, and is a distinct historical document as close to the truth as one can get.

Now, in The Reasonings of Buju Banton, Bounty Killer & Sizzla, the 8th book in the series, you can get inside the minds of some of the most important artists who have made their mark on Reggae music for generations to come.

Buju Banton is one of these men. A certified natural talent, his career was hallmarked by his socio-political and overtly sexual lyrics. Then he turned his back and became a devout Rastafarian. Today, he is incarcerated.

Bounty Killer is acknowledged far and wide as The Warlord. His commanding delivery, attitude and streetwise outlaw music made him one of the biggest stars of his generation. He has likewise spoken candidly on the state of Reggae music and what was keeping it back from crossing over to the masses. Then he faced his most formidable opponent, ever.

Sizzla has released over 60 albums and is respected worldwide for his music. He has actively engaged a youthful following with his spiritual Rastafarian teachings and lifestyle, educating them on corruption, oppression and how to uplift themselves.

The Reasonings of Buju Banton, Bounty Killer & Sizzla is a rare treat. It captures the thoughts and hopes of artists who have made it their lives to bring one of the most popular forms of music to a much wider audience.