Courtly Feasts to Kremlin Banquets: A History of Celebration and Hospitality: Echoes of Russia's cuisine (Hardcover) 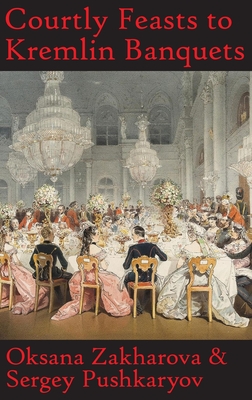 Courtly Feasts to Kremlin Banquets: A History of Celebration and Hospitality: Echoes of Russia's cuisine (Hardcover)

This is a book not only for lovers of food but also for those with an appetite for adventure and a thirst for the discovery of exciting gastronomic delights.

Russian history presents us with a rich tapestry of extravagant ceremony, characterized not only by the magnificent grandeur of individual courtly feasts but also by successive generations of nobility actively vying with each other to surpass the splendour created by their predecessors. Russian hospitality has always exuded a special vitality and sense of warm-hearted sociability. In Old Russia there was also a significant link between hospitality and the teachings of the Orthodox Church.

The political and social history of Russia has seen some very violent changes. The more shocking the political events of a country, the more brutal the cultural changes can be. At times, the differences between the past and the present are so extreme that one is faced with completely different worlds. Despite dramatic and often heart-breaking upheavals, we do surely have a duty to remember those distant roots that helped to nourish the present.

"Modern society contemptuously dismisses and sneers at the former way of life and deliberately breaks any connection with the past, which would always have been held to be so dear at the time." These words of writer, historian and theatre critic Yevgeny Opochinin were published in 1909 before the full horror of the revolutionary upheaval. The relevance of such remarks is surely as valid now as then.

Throughout history, special events have been an important way of imparting tradition from one generation to another, and symbolic meanings can still be found, if one knows the stories from the past. One just has to know where to look.

So, it is time to raise a toast in memory of bygone custom and tradition and to celebrate that great warm-hearted generosity of the Russian people