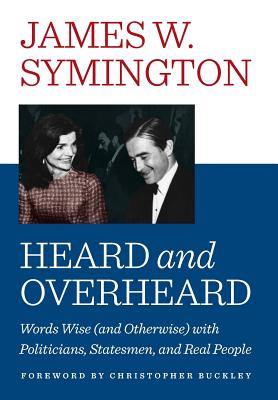 
Not On Our Shelves—Ships in 1-5 Days
(This book cannot be returned.)
Jim Symington has a rare addiction for Washington: he listens. Right-hand man for Bobby Kennedy, Lyndon Johnson and Ambassador Jock Whitney, he was present-often a participant-as national and world events unfolded. Witnessing history from the New Deal to President Obama's Cuban initiative, Symington is a willing recorder of eavesdrops, "ranging in propriety from blasphemy to prayer." Heard and Overheard is presented in a prefatory sampler and three parts involving "politicians, statesmen, and real people." To read it is to relive pivotal moments of modern history, to meet the giants (and villains) of our time, and to savor a narrative that is epic in scope, gem-like in faceted brilliance, and laugh-out-loud hilarious. "Jimmy Symington...is one of the best story-tellers in the world, a distinction he shares with his fellow Missourian, Mr. Mark Twain... He] is a WASP Forrest Gump... You name it, he was there. The man has had more lives than a cat; more phases than Madonna." -from the foreword by Christopher Buckley.