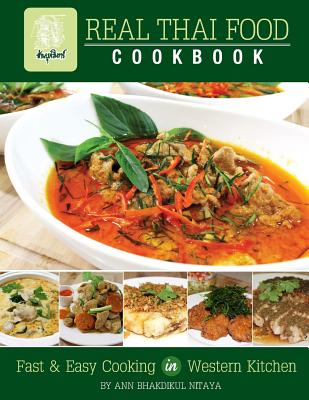 
Not On Our Shelves—Ships in 1-5 Days
(This book cannot be returned.)
THAI FOOD is becoming World Class Cuisine with its delicacy. People feels that THAI FOOD is hard to prepare. The intention of this COOKBOOK is, thus, to allow everyone to be able to cook authentic THAI FOOD in any Western Kitchen around the world. We 'ensure Fast & Easy Methods' with popular recipes to serve on both daily basis or on special occasions. This COOKBOOK is written as the first in a series. Therefore, it is written with the purpose of giving basic knowledge on how to choose things for Thai Kitchen. Details are given on the basic items and ingredients that one should have prior to enjoying Thai Cooking. Moreover, the choices of meats to be used and how to prepare them to transform them into Thai Recipes are also provided. Most importantly the COOKBOOK will provide guidance in choosing and preparing the vegetables that are normally used in Thai Recipes correctly. Not all vegetables will be used in this COOKBOOK, but will be used in the future COOKBOOK series. This COOKBOOK presents 15 basic recipes which can be diversified into more than 50 Masterpiece Recipes. Each recipe will have pictures to easily show ingredients and Fast & Easy steps in preparing. This CooKBooK is packed with colorful photographs to foster the know-how as to how to prepare perfect Thai Dishes. No need to go out for un-authentic Thai Food in Thai Restaurants from now on. Do it yourself and enjoy authentic Thai Food. See you in the next COOKBOOK series soon.
"Based on over 50 years experience, Ann's recipes proof that anyone can easily duplicate her restaurant quality dishes." I have been cooking since I was 8 years old, at that time I helped the cook in my family everyday. Whenever we were in absence of the cook, my mother would let me cook for the entire family. I had to go to the market with the driver, who followed me shopping. In 1960, at the age of 14, I went to stay with my eldest sister whom was studying Food Tech. at the UC Davis. Of course, it was only natural that we had to help one another with our house-works, even though I was still in Junior High. Very often, I taught cooking to a lot of Thai people; some were new Thai students who just came and there was a Thai lady who married an American Professor at the UCD. What I taught them was the basics for cooking Thai food and, all of them appreciated my help very much. In 1963, I moved to Berkeley, because my second sister went to the UCB for her Masters, while I attended Berkeley High School. In the Bay Area, there was a Thai Students' Association of Northern California. Many events were held there throughout the year, such as the Thai Night, Thai Festival Parties, etc. I was always part of the back helpers for all those events. After my second sister graduated, I moved into a family owned dormitory for foreign students in Richmond. There I made Thai food for my dormmates quite often. After I finished my college, I had a family. With my husband graduating from the UC Berkeley, and continuing his Masters Degree at the UW Seattle, and later his Doctoral Degree at the UM Ann Arbor. I had to work on top of raising two children. Everywhere, we were active with the Thai Students' Associations. At that point, I became the head cook for the Thai Students' Association events, such as the "Thai Nights, etc." In 1975, I asked my eldest sister to start our own Homemade Ice cream Shop "31 A&N" in Bangkok. Later, we added on Quick Lunches and, Thai Fast Food Programs to our shop. We continued our business until 1997. We sold our property, to be developed as Phyathai Place Condominium. This 28 stories high-rise condominium was completed in 1998. We then moved into the ground floor to open our new restaurant. My eldest sister resigned and I decided to open a complete line of full day bakery-restaurant "Ban Busrin Homemade Food Bakery and Ice cream" by myself.