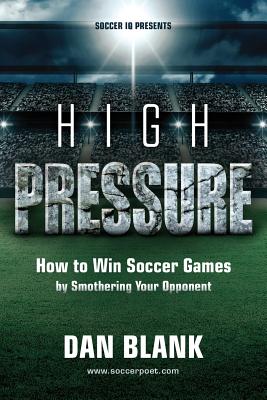 
Not On Our Shelves—Ships in 1-5 Days
(This book cannot be returned.)
In this installment of the Soccer iQ series, college soccer coach and best-selling author, Dan Blank, educates coaches and players on the most effective ways to implement a high-pressure style of team defending. Nearly 80% of goals scored are the result of three or fewer passes, and more than half of all goals scored begin when a team wins possession of the ball in its attacking half of the field. The numbers clearly indicate a statistical advantage to winning the ball in the opponent's end of the field, and that's exactly what high pressure is designed to do. High pressure is perhaps the most misunderstood term in soccer's vocabulary. There are countless coaches who want their teams to play high pressure, but many of them aren't always quite so sure about what that means. They tend to translate 'high pressure' into 'run around like you stole something until we score.' They only extract the urgency of which the term implies without much understanding of the nuance that makes high pressure a formidable system of team defense. Those coaches understand that high pressure requires a high work rate, but they don't understand the tactical savvy that can maximize the output of that work. As a result, their teams feature only the madness but not the method behind successful high pressure. High Pressure provides an easy-to-follow blueprint for coaches and players so they know not only what to do, but why they are doing it. In this book, Dan Blank clarifies the differences between high and low pressure and explains the big picture of high pressure defending. You will learn the roles of each position, the importance of restraining lines, and how to set up pressure funnels to win the ball in the attacking half. Coach Blank also details the telltale cues that signal a team to step up or back off its pressure, and much, much more. High pressure defending requires more than just hard work. It requires organization, communication and an indefatigable team spirit. This book will show you how to create and implement these elements to get a maximum return on your team's effort.