Rally Caps, Rain Delays, and Racing Sausages: A Baseball Fan's Quest to See the Game from a Seat in Every Ballpark (Paperback) 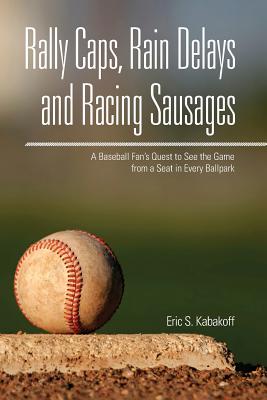 Rally Caps, Rain Delays, and Racing Sausages: A Baseball Fan's Quest to See the Game from a Seat in Every Ballpark (Paperback)


Not On Our Shelves—Ships in 1-5 Days
A fervent baseball fan since the age of ten, Eric Kabakoff visited the home park of every major league franchise to see up close how each team tries to stir up the passions of its fans. In the years between his first-ever ballgame in Philadelphia and the last of his quest in Tampa, he had seen baseball in four different decades: from the 26-team 1980's to the current 30 teams of the 2010's. He did the Tomahawk Chop in Atlanta, cursed out the Rally Monkey in Anaheim, and gave the controversial Barry Bonds a standing ovation in San Francisco. He absorbed Dodger Dogs, Philadelphia Cheesesteaks and Kansas City Barbeque. Eric was able to see everything up close...from the stadiums and local culture to food and team histories. From Rally Caps in Detroit to Rain Delays in Miami to Racing Sausages in Milwaukee, every major-league team adds something different to the collection of statistics and memories that we call the National Pastime.