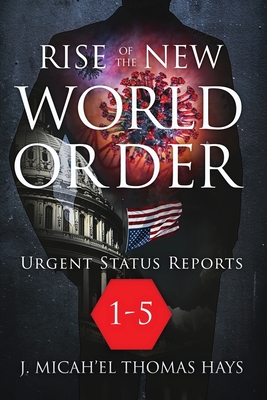 Back at the start of 2020 when the 'pandemic' was just starting, I was kicking myself because I had yet to assemble and publish Book 3 of my main "Rise of the New World Order" series.

After reviewing the facts coming out about the 'pandemic', it became very obvious to me that this was a global false flag to kick off the Great Reset and the implementation of the prophesied global government, aka the New World Order.

As a Sentinel, I was compelled to pull off that third book and warn the people who looked to me for answers as to what was really going on...the beginning of the End. These are the first five reports I've issued since the beginning of the plannedemic...

A lot of people asked me to consolidate these reports into one book that could be turned into a paperback, so here they are, updates 1 through 5, unedited, exactly as they appeared to start with, in paperback.

Thanks for your prayers and support, friends. -Sentinel Jeff Hays

This from the back cover:

Eugenicist elites hungry for world domination via the Great Reset...An engineered bioweapon turned loose on an unsuspecting public...An intentionally faulty virus test to create the illusion of a deadly pandemic...A rushed and experimental vaccine delivered in record time with no long-term safety studies...Mandatory vaccinations implemented to force the injections upon the resistant...

The ancient occult plan to cull the global population and install the prophesied one world government is in motion as you read this...the Great Reset is the door through which the New World Order will arrive.