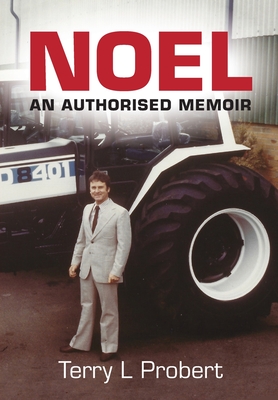 No one played a bigger part in driving Ford Tractors to market leadership in Australia during the eighties than Noel Howard and in his memoir he tells author Terry L Probert about the reasons for decisions taken both in Australia and World Headquarters in Dearborn that led to the mighty name of Ford disappearing from the tractor market by the mid nineties.

NOEL exposes the internal tension between him and other Ford executives both above and below his pay-scale as everyone snatched at the spoils as Ford and New Holland Management tried to deliver an equitable outcome. Decisions taken may not have fallen Noel's way and not one to easily forgive a wrong doing, he explains how he hit back at his adversaries with a competitive product. However, this is much more than a story about the ugly breakup of Ford and New Holland, much more.

From his earliest of memories, Noel seemed to be driven to succeed and as much as it is an interesting story, NOEL could also be a textbook for a marketing student to follow. Starting with his mother teaching him about presentation as she dipped yeast-buns in sugar syrup and explaining how making them look attractive added to their profit for the family bakery. The love he had for his mother is evident in the way he talks about her and yet he understood also how hard she worked to protect the family name, scolding him for completing a daredevil flying act while still a teenager. Although winds through the story, Noel was sent away to school at a very early age to improve his schooling and put him in the way of opportunity whenever it might present itself.

From a child attending a one room school in Kiewa to becoming 1973 the youngest general manager within the Ford Motor Company World. His life is littered with examples of hard work, innovation, dogged determination and the need to build great networks. Able to reach people deep within the Australian government, or being on good terms with people inside the Ford family, Noel was at ease with the common man and didn't know how much respect or admiration his dealers held him in.

NOEL an Authorised Memoir, is about leadership, integrity, guts, determination and team work. This is a book for people who may wish to reminisce about a past era, or those who want to lead an organisation as much as it is about the history of Australia's farm machinery industry in the last half of the Twentieth Century. A book for everyone.