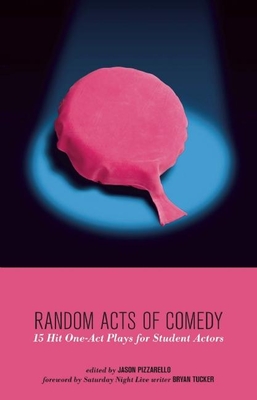 
Special Order—Subject to Availability
Home of the most popular one-act plays for student actors, Playscripts, Inc. presents 15 of their very best short comedies. From a blind dating debacle to a silly Shakespeare spoof, from a fairy tale farce to a self-hating satire, this anthology contains hilarious large-cast plays that have delighted thousands of audiences around the world. Includes the plays The Audition by Don Zolidis, Law & Order: Fairy Tale Unit by Jonathan Rand, 13 Ways to Screw Up Your College Interview by Ian McWethy, Darcy's Cinematic Life by Christa Crewdson, The Whole Shebang by Rich Orloff, A Funny Thing Happened on the Way to Fifth Period by Jason Pizzarello, Small World by Tracey Scott Wilson, The Absolute Most Cliched Elevator Play in the History of the Entire Universe by Werner Trieschmann, The Seussification of Romeo and Juliet by Peter Bloedel, Show and Spell by Julia Brownell, Cut by Ed Monk, Check Please by Jonathan Rand, Aliens vs. Cheerleaders by Qui Nguyen, The Brothers Grimm Spectaculathon by Don Zolidis, 15 Reasons Not To Be in a Play by Alan Haehnel