No Innocent Bystanders: Riding Shotgun In The Land Of Denial (Paperback) 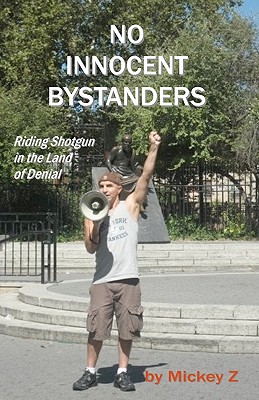 No Innocent Bystanders: Riding Shotgun In The Land Of Denial (Paperback)


Not On Our Shelves—Ships in 1-5 Days
(This book cannot be returned.)
No Innocent Bystanders is a manifesto in fractals. Transcending labels and political parties, it gets to the heart of our planet's rapid decline using a blend of facts, humor, vignettes, and relevant quotes and lists. On the liner notes for The Freewheelin' Bob Dylan album, it's stated that the song "A Hard Rain's A-Gonna Fall" was written during the 1962 Cuban Missile Crisis. "A desperate kind of song," Dylan called it. "Every line in it is actually the start of a whole song," he explained. "But when I wrote it, I thought I wouldn't have enough time alive to write all those songs so I put all I could into this one." No Innocent Bystanders has been created in that spirit.
"Mickey Z.'s voice is the roundhouse kick of activist literature...profoundly mistrustful of government in all its dreadful guises, while courageously supporting all of us who stand against it. Determined to live the words, rather than simply to speak them, Mickey Z. doesn't get more readers, he just makes more friends. His blog is like a front stoop where we all gather to talk over the news, what's happening with each other, and generally enjoy each other's company. The gentle concern for his fellow humans and the behind-the-scenes acts of kindness are surpassed only by the cuteness of his dimples." - The Expendables