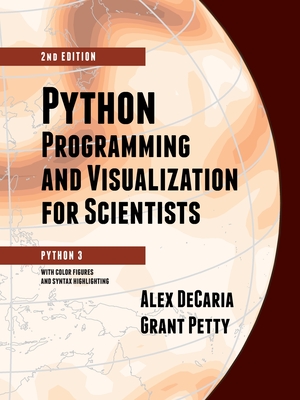 Python continues to gain dominance as a language of choice for analyzing and visualizing scientific data. Although it has concise, intuitive syntax, learning how to plot and visualize data requires scouring the internet for documentation and examples. This book was written from the perspective of "What book would the authors want to have had when they were transitioning to Python?"

A second edition of the book was made necessary by the transition to Python 3, which did not maintain full backward compatibility with earlier versions of the language. The second edition has been completely revised to ensure that all code examples work in Python 3. Additional chapters on the Pandas library and Cartopy have been included, as well as an appendix on Jupyter notebooks, which have become an important tool for developing and communicating code in both the research and educational settings.

The 90 figures are mostly in color, and color syntax highlighting is used with all code samples throughout the text to facilitate visual recognition of program structure.

The first edition of the book has proven useful not only as a classroom text but also as a guide and reference for students, educators, and researchers who already have programming experience and want to start creating plots and analyzing data using Python. The second edition will serve the same role. It is not meant for the person who is completely new to programming, nor is it an introductory computer science textbook. The authors' assumptions are that the reader has some experience programming with a language other than Python.

Although the new Python programmer may wish to read the book cover to cover, the book is organized such that an experienced programmer can readily jump to the appropriate chapter. An extensive index aids in searching for functions and methods useful for data visualization and analysis.