Old Path White Clouds: Walking in the Footsteps of the Buddha (Paperback) 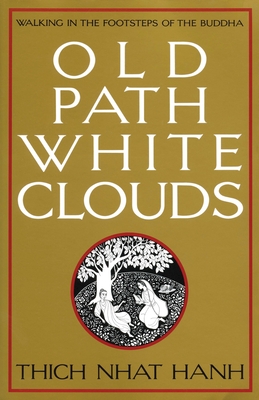 Old Path White Clouds: Walking in the Footsteps of the Buddha (Paperback)


Special Order—Subject to Availability
Old Path White Clouds presents the life and teachings of Gautama Buddha. Drawn directly from 24 Pali, Sanskrit, and Chinese sources, and retold by Thich Nhat Hanh in his inimitably beautiful style, this book traces the Buddha’s life slowly and gently over the course of 80 years, partly through the eyes of Svasti, the buffalo boy, and partly through the yes of the Buddha himself. Old Path White Clouds is destined to become a classic of religious literature.

"I have not avoided including the various difficulties the Buddha encountered, both from his own disciples and in relation to the wider society. If the Buddha appears in this book as a man close to us, it is partly due to recounting such difficulties." - from the author’s Afterword.
Thich Nhat Hanh was a world-renowned spiritual teacher and peace activist. Born in Vietnam in 1926, he became a Zen Buddhist monk at the age of sixteen. Over seven decades of teaching, he published more than 100 books, which have sold more than four million copies in the United States alone. Exiled from Vietnam in 1966 for promoting peace, his teachings on Buddhism as a path to social and political transformation are responsible for bringing the mindfulness movement to Western culture. He established the international Plum Village Community of Engaged Buddhism in France, now the largest Buddhist monastery in Europe and the heart of a growing community of mindfulness practice centers around the world. He passed away in 2022 at the age of 95 at his root temple, Tu Hieu, in Hue, Vietnam.