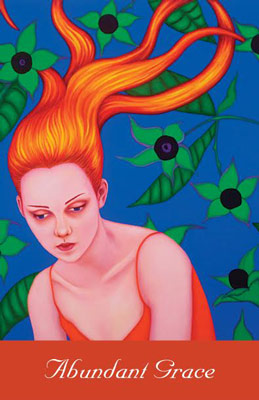 Featuring fiction by a wide range of women writers in the Washington area, this collection joins Defying Gravity, Amazing Graces, Enhanced Gravity, Gravity Dancers, and others as the seventh volume in the Grace & Gravity series, edited by award-winning poet and writer Richard Peabody, founder of Gargoyle magazine and Paycock Press.

Each of the seven volumes have had subliminal themes, subject matter that has risen out of the collective id of the writers and never by theme or command.  Abundant Grace seems to be about picking your battles, paying attention, phantasmagoria,  spirit animals, and death/change. Here we offer a roller coaster ride of lost fathers, missing husbands, cheaters, forked dicks, pedophiles (real and imagined), men named George who live in Georgetown, dogs, fish, crows, a marriage breakup at the Air and Space Museum, unexpected pregnancies, bomb shelters, the indignities of aging, voodoo altars, incest, fire and water imagery, miscarriage, gelato, ghosts, thalidomide kids, dog heads in bowls of soup, and how little we actually know about others no matter how close we think we are.

Caroline Bock’s flash fiction could be the foundation for this collection, maybe the entire series. “We drink more wine, weep, scream, howl, beat our fists against one another, laugh gulping for air, a certain power in us to write about anything.” Combine that with the not so subliminal message that men seem to miss everything when it comes to women, especially women writing.

The title of Frances Carden’s story, “Nature’s Graveyard,” is also in play throughout the collection. “Today everything seems like an omen,” she writes.

And there is death in abundance. Bobbi Carducci kills off Oprah. A quarry in Alison Fairbrother’s flash fiction is used only to make tombstones. Reflecting the times there are funerals a plenty. Madelyn Rosenberg’s Harold Crane paints eyes for the dead. Pam Risdon’s Sara, in “Sarah’s Way,” smuggles a corpse into her bed. And  Atossa Shafaie’s character Ferri Khanoum works as a professional mourner.

There are plenty of wicked yucks, too. Jess Stork Glicoes shares a Get Smart-ish vision of resume fodder and the workplace, Amanda Miska updates the Samson and Delilah legend, Melody Schreiber posits the “Robin Hood of food,” Abbey Mei Otis imagines sex robots falling out of the heavens, Dahlia Shaewitz’s 50-year-old Adrienne hooks up in a Key West sex shop, and Jourdan Woo imagines a Tim Burton-ish zombie makeover shop dubbed “Curl Up and Dye.”

Both Barbara Lefcowitz and J. Howard’s stories use JFK, Jackie, and Camelot as touchstones. And Jackie O. gets a passing mention in others.

In “Black Ice,” Caron L. Martinez portrays a family whose “mood turns on the whim of just one person, and that person, inexplicably, is one of the children.”

Melissa Scholes Young’s “Oxygen in Use” is a heart-breaking mother-daughter end of life story with a feisty mom and a daughter conflicted over whether or not to ease her pain.

Morowa Yejide’s story, “Heathens,” lends the perfect final touch to this volume and perhaps to the entire series. Mia Taylor is the Everywoman attempting to navigate the social and workaday worlds of the Nation’s Capital amid stress and diminishing returns. She tries to keep up appearances with family and neighbors as the train wreck of her life becomes increasingly clear.

Shirley Cochrane was one of the first champions of my fiction, Faith Reyher Jackson came my way via Jonathan Agronsky, and Barbara F. Lefcowitz (who was a fixture at the Bethesda Writer’s Center for decades) was made available by her daughter Marjorie Schwartzer.

"Washington DC is not a place most people associate with delicious literary fiction. But they should, and Peabody's anthologies of fiction by DC area women are proof. Big, rich, and frothfully fabulous, ABUNDANT GRACE is the perfect title for this latest collection to savor-- or devour!"


"Having spent my life writing and reading in DC, I'm thrilled at this collection of stories by some of Washington's finest writers --- women with strong voices and bold ways with the language. These stories take us both to new places and to our familiars. The unique characters on these pages are so vividly rendered, so full of surprises, we can't help but to devour this book.  You'll find every kind of wanting, unexpected joys, difficult questions and graceful answers."

"Once again, Richard Peabody has gathered together an astounding range of talent from the Washington, D.C. area. For anyone who believes that D.C. is not a hotbed of daring, powerful writers, Abundant Grace again proves them wrong."