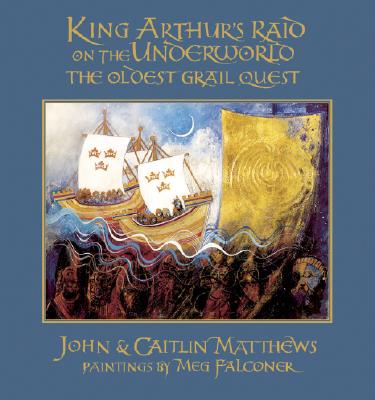 
Not On Our Shelves—Ships in 1-5 Days
The 9th century Welsh poem Preiddeu Annfwyn or The Raid on the Underworld ascribed to the 6th century poet and shaman Taliesin, is one of the oldest and most enigmatic documents relating to the mythic hero Arthur that we still possess. Extending to a mere 61 lines, it contains within it vital clues to the Celtic Mystery traditions of this and earlier times.

Describing the descent of Arthur and his men on the ship Prydwen into the region of Annwfn (literally, 'the in-world' or underworld of Celto-British tradition, or Annwn in modern Welsh) in order to steal the wonder-working cauldron from the Lord of Annwfn, this poem hides many secrets within its shimmering lines. The cauldron is one of the Thlysau or Treasures, hallowed otherworldly objects that are the source of illimitable power. Arthur's quest for the cauldron of the underworld is a precursor of many more famous quests, while the cauldron itself is the forerunner of the Grail.