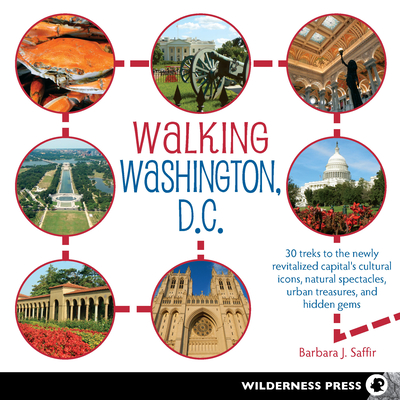 
In Stock—Click for Locations
Think you know Washington, D.C.?

Have you explored the monumental masterpiece that subbed for the White House in Angelina Jolie's thriller, Salt? Do you know where some Supreme Court justices like to dine? Have you stumbled upon D.C.'s secret tax-free shopping? Want to learn how best to snag a visit to the White House or one of Washington's 171 embassies?

In Walking Washington, D.C., author and insider Barbara J. Saffir gives the low-down on all this and much more as she leads urban adventurers on 30 self-guided tours that blend culture, nature, newsy tidbits, and plain old fun. In addition to serving up the revitalized capital's beloved cultural icons, she also treats readers to a yummy buffet of lesser-known fun facts that bring the city alive. From the majestic monuments of the National Mall and the magical historic district of Georgetown to the colorful neighborhoods of Adams Morgan, U Street, Penn Quarter, and D.C.'s coolest new riverfront neighborhoods, this guide is an indispensable road map for visitors and Washingtonians alike. Clear directions, maps, and public-transit information make it easy to get around. Grab this book and you're on your way.

Barbara J. Saffir felt like a full-fledged Washingtonian the first time she chose to put a call from the White House on hold to take another call. She has been exploring D.C.'s urban treasures and its softer side for the Washington Post, other publications, and herself for three decades. That involved chasing a White House limo through a courthouse garage; strapping herself in a two-seater, wooden World War II airplane; interviewing politicos and bureaucrats; and unearthing gems from government offices, archives, and libraries. All the while she was biking, hiking, running, and paddling through the District's streets, parks, trails, and rivers. As a former reporter, political researcher, architecture critic, and nature photographer, she has always adored sharing adventures and discoveries that inspire people to say, "Wow!"