Just Passin' Thru: A Vintage Store, the Appalachian Trail, and a Cast of Unforgettable Characters (Paperback) 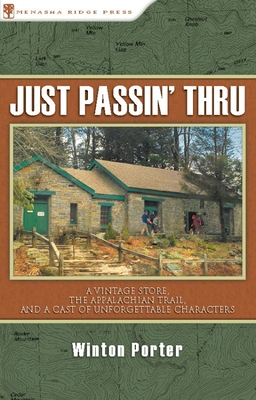 Just Passin' Thru: A Vintage Store, the Appalachian Trail, and a Cast of Unforgettable Characters (Paperback)


Not On Our Shelves—Ships in 1-5 Days
Winton Porter shares tales of the cast of characters that pass through a mountain store and hostel on the Appalachian Trail.
Ever since starting his lawn-mowing business at age 10, Winton Porter has found it hard to stay indoors. At 21 he opened B. Bumblefoot and Co., producing hiking sticks for retailers throughout the southeastern United States. And for years he tried the corporate route--selling gear and managing operations at such retailers as REI in Chicago, Salt Lake City, and Atlanta. In 2001, at age 35, he ransacked his 401k and bought the venerable Mountain Crossings store, a hiker's mecca deep in the Georgia woods near the southern end of the Appalachian Trail. It's a blissful match for the lifelong outdoorsman and natural-born storyteller. Now called the Guru of the Appalachian Trail, Winton is famous for his "shakedowns" to help weary hikers lighten their loads. When he's not busy selling boots and shipping hikers' boxes home, he's writing about the zany adventurers that populate the trail and his store. Winton's memory for dialogue, eye for detail, compassion for those in trouble, and gift for humor come together in the 20 chapters that make up his first book, "Just Passin' Thru."

"For a guy whose job has him posted in the middle of nowhere, Winton Porter certainly draws a crowd." -Bo Emerson, The Atlanta Journal-Constitution


"'Just Passin’ Thru is a work of genius."-Former assistant secretary of state for the State of Iowa, Scott Ourth