Getting Away with Murder on the Texas Frontier: Notorious Killings and Celebrated Trials (Paperback) 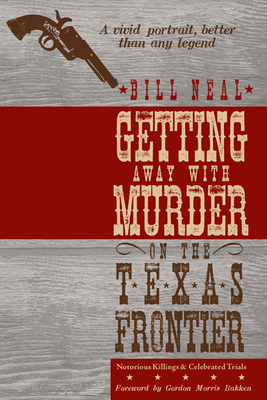 Getting Away with Murder on the Texas Frontier: Notorious Killings and Celebrated Trials (Paperback)


Not On Our Shelves—Ships in 1-5 Days
In 1916, in the tiny West Texas town of Benjamin, a gunman slips into a courtroom and murders the defendant. In 1912, in Fort Worth’s finest hotel, a young man kills an old gentleman in cold blood in the middle of the lobby. The verdict in both of these murderers’ trials? Not guilty. The explanation? “This is Texas.” Laws passed by politicians in far-off Austin meant little to Westerners living on the Texas frontier. Sagebrush justice relied less on written statutes than on common sense, grass-roots fairness, and vague notions of folk law drawn from the Old South’s Victorian code of chivalry and honor. In this very different time and place, a murderer might go free based on the following reasoning: “The son-of-a-gun is guilty all right, but we must turn him loose. He owes me for a pair of boots, and if we convict him I’ll never get my money.” Inexperienced prosecutors, a lack of modern crime-detection methods, unavailability of witnesses, an acceptance of violence in society, and a laissez-faire attitude toward trial tactics all conspired to make guilty verdicts a rarity. In this first volume of a planned trilogy, Neal presents the evidence that shows how easy some folks found it to evade justice in the frontier West.CONTENTSThe Unlikely Saviors of Thomas J. Fulcher | The 1896 Wichita Falls Bank Robbery | The 1890s Wells Fargo Murder Trials | Pardon Me, Please! | More Scandalous Adventures of the Isaacs Family | Murder and Mayhem in the Knox County Courthouse | Strychnine in the Bride’s Flour | . . . And the Perpetrator Walked
Bill Neal practiced criminal law in West Texas for forty years: twenty as a prosecutor and twenty as a defense attorney. Getting Away with Murder on the Texas Frontier was named Book of the Year for 2008 by the National Association for Outlaw and Lawmen History, received the Rupert N. Richardson Award for the best book on West Texas history from the West Texas Historical Association, and was a finalist for both the Violet Crown Award by the Writers’ League of Texas and the Spur Award by the Western Writers of America. Neal and his wife, Gayla, live in Abilene, Texas.Gordon Morris Bakken earned his degrees at the University of Wisconsin and teaches American history at California State University, Fullerton. He is the author of sixteen books as well as numerous articles and law reviews, book chapters and encyclopedia entries, and book reviews.