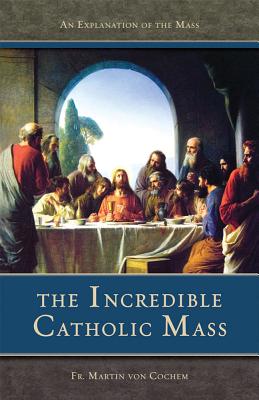 
Not On Our Shelves—Ships in 1-5 Days
THE INCREDIBLE CATHOLIC MASS is truly an incredible book about the most incredible reality in our midst-the Catholic Mass No doubt fewer than ten percent of lay Catholics, before reading this book, would be aware of even ten percent of what it teaches. Written by a learned theologian, who was also a popular writer, THE INCREDIBLE CATHOLIC MASS is the fruit of a life-time of study, plus, for this book alone, three years of intensive research in Scripture, the declarations of the Church, the Fathers and Doctors, and famous spiritual writers. The result is a book of tremendous breadth and penetration-one which, though highly theological, is not written in a dry, theological tone, but is aimed directly at the average reader, to show him what the Mass is in its essence and what great advantages and consolation it possesses for him-if he will just offer it with the priest in an informed way and with great devotion. For the Mass is none other than the re-enactment of the actual Sacrifice of Christ on Calvary-though in a sacramental and unbloody manner. Thus, in the Mass, we have Our Lord Jesus Christ Himself acting as Chief Priest and Primary Intercessor for us with the Heavenly Father. In other words, we have in the Mass an unfailingly powerful Mediator, who will present us and our petitions in the best possible light to God the Father. Filled with fabulously interesting true stories about the Mass and many Eucharistic miracles, the book reads extremely fast and easily, keeping the reader's attention riveted on first one absorbing point and then another, all of which are melded into a symphony of insight about the Mass that will leave the reader in absolute awe Here is a book that is a product of our rich Catholic heritage, one that is destined to instruct both our modern times and the future. Written with the traditional Latin Mass as its paradigm, it is nonetheless not actually about that Mass, but about the essence of the Mass in general-about any Mass, in any rite-and thus it has a universal appeal and is for the whole world. Here is a book that should be owned by every Catholic 15 years of age or older and that should be read and re-read until its insights are one's own-and thereafter every three to five years to refresh one's memory. The laity will gain tremendous instruction from this book, and even priests will discover their learning about the Mass renewed and their fervor in saying it increased. Everyone who reads THE INCREDIBLE CATHOLIC MASS will think of his Mass attendance in terms of before and after this book. For it confirms the understanding that the Mass is incomparably the greatest prayer-that it is offered to God, not just by the officiating priest, but also by Jesus Christ Himself: in homage, in praise, in thanksgiving, in reparation, in petition, for conversions, for the Poor Souls, for health, for the Church, for the country, for society, etc., etc.-in short, for whatever legitimate intention a person can have.
The Rev. Father Martin of Cochem, O.S.F.C., was a German Capuchin born in 1630 at Mosel. He entered the Order of Friars Minor Capuchin as a novitiate while still young, subsequently received Holy Orders, and was ultimately assigned as a professor of theology. He also cared for the plague victims of 1666, and thereupon began composing popular religious writings and treatises. Father Cochem authored such works as The Last Four Things and The Incredible Catholic Mass, the former of which was printed by TAN in 1987. He died on the tenth of September, 1712, at Waghausel.