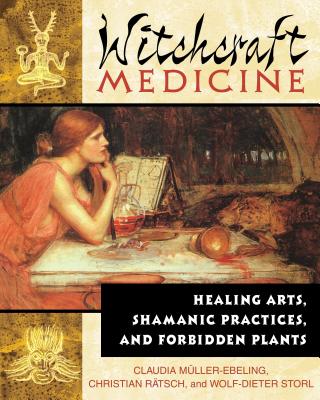 Witch medicine is wild medicine. It does more than make one healthy, it creates lust and knowledge, ecstasy and mythological insight. In Witchcraft Medicine the authors take the reader on a journey that examines the women who mix the potions and become the healers; the legacy of Hecate; the demonization of nature’s healing powers and sensuousness; the sorceress as shaman; and the plants associated with witches and devils. They explore important seasonal festivals and the plants associated with them, such as wolf’s claw and calendula as herbs of the solstice and alder as an herb of the time of the dead--Samhain or Halloween. They also look at the history of forbidden medicine from the Inquisition to current drug laws, with an eye toward how the sacred plants of our forebears can be used once again.
Claudia Müller-Ebeling, Ph.D., is an art historian and anthropologist and coauthor, with Christian Rätsch, of Shamanism and Tantra in the Himalayas, Witchcraft Medicine, and Pagan Christmas. She lives in Hamburg, Germany.

Christian Rätsch, Ph.D. (1957 – 2022), was a world-renowned anthropologist and ethnopharmacologist who specialized in the shamanic uses of plants for spiritual as well as medicinal purposes. He studied Mesoamerican languages and cultures and anthropology at the University of Hamburg and spent, altogether, three years of fieldwork among the Lacandone Indians in Chiapas, Mexico, being the only European fluent in their language. He then received a fellowship from the German academic service for foreign research, the Deutsche Akademische Auslandsdienst (DAAD), to realize his doctoral thesis on healing spells and incantations of the Lacandone-Maya at the University of Hamburg, Germany.

In addition to his work in Mexico, his numerous fieldworks have included research in Thailand, Bali, the Seychelles, as well as a long-term study (18 years) on shamanism in Nepal combined with expeditions to Korea and the Peruvian and Colombian Amazon. He also was a scientific anthropological advisor for expeditions organized by German magazines such as GEO and Spektrum der Wissenschaften (Spectrum of Sciences).

Before becoming a full-time author and internationally renowned lecturer, Rätsch worked as professor of anthropology at the University of Bremen and served as consultant advisor for many German museums. Because of his extensive collection of shells, fossils, artifacts, and entheopharmacological items, he had numerous museum expositions on these topics.

He is the author of numerous articles and more than 40 books, including Plants of Love, Gateway to Inner Space, Marijuana Medicine, The Dictionary of Sacred and Magical Plants, and The Encyclopedia of Psychoactive Plants. He is also coauthor of Plants of the Gods, Shamanism and Tantra in the Himalayas, Witchcraft Medicine, Pagan Christmas, and The Encyclopedia of Aphrodisiacs and was editor of the Yearbook of Ethnomedicine and the Study of Consciousness. A former member of the board of advisors of the European College for the Study of Consciousness (ECSC) and former president of the Association of Ethnomedicine, he lived in Hamburg, Germany.

Wolf-Dieter Storl, Ph.D., is a cultural anthropologist and ethnobotanist who has taught at Kent State University as well as in Vienna, Berne, and Benares. He is coauthor of Witchcraft Medicine and has written a number of books on indigenous culture and ethnobotany. He lives in Germany.
“This is a fascinating work of great importance that is incredibly well researched and documented. And brave. From the first impassioned paragraph to the last words, I was spellbound. Anyone interested in medicine, herbalism, the healing arts, and spiritual phenomena will find this book thought provoking and empowering.”
— Rosemary Gladstar, president of United Plant Savers and author of Herbal Healing for Women

"Tracing human relations with plants back to the Stone Age, the book is deeply thorough and rests on interesting scholarship."
— Publishers Weekly, October 2003

"It is essential reading for anyone interested in the folklore and magical beliefs asociated with flowers, herbs and trees."
— The Cauldron, February 2004

“Witchcraft Medicine is a work of brilliant and passionate scholarship, fabulously illustrated, that recovers the lost knowledge of the European shamanic tradition. It is both a guide and an enthusiastic ode to the visionary edge of the botanical realm.”
— Daniel Pinchbeck, author of Breaking Open the Head: A Psychedelic Journey into the Heart of Contempo

"Witchcraft Medicine is a solid book and an essential research tool for anyone interested in European folk traditions, magic, alchemy, or herbalism."
— Mark Stavish, Institute for Hermetic Studies, April 2006