Riding Windhorses: A Journey into the Heart of Mongolian Shamanism (Paperback) 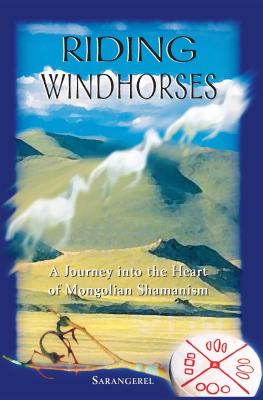 Riding Windhorses: A Journey into the Heart of Mongolian Shamanism (Paperback)


Not On Our Shelves—Ships in 1-5 Days
The first book written about Mongolian and Siberian shamanism by a shaman trained in that tradition.

• A thorough introduction to Mongolian and Siberian shamanic beliefs and practices, which, until the collapse of the Soviet Union, were banned from being practiced.

In traditional Mongolian-Buryat culture, shamans play an important role maintaining the tegsh, the "balance" of the community. They counsel a path of moderation in one's actions and reverence for the natural world, which they view as mother to humanity. Mongolians believe that if natural resources are taken without thanking the spirits for what they have given, those resources will not be replaced. Unlike many other cultures whose shamanic traditions were undermined by modern civilization, shamans in the remote areas of southern Siberia and Mongolia are still the guardians of the environment, the community, and the natural order.

Riding Windhorses is the first book written on Mongolian and Siberian shamanism by a shaman trained in that tradition. A thorough introduction to Mongolian/Siberian shamanic beliefs and practices, it includes working knowledge of the basic rituals and various healing and divination techniques. Many of the rituals and beliefs described here have never been published and are the direct teachings of the author's own shaman mentors.
Sarangerel was trained in the Mongolian and Buryat shamanic traditions by native teachers who are now free to practice again following the collapse of the Soviet Union. She was the foreign outreach representative of the Golomt Center for Shamanist Studies and the Mongolian Shamans' Association.
"It is an informed and down-to-earth introduction to the shamans' earth-centered religion."
— Publishers Weekly, May 15, 2000

"Fascinating reading. An interesting book that gives a good introduction to this fascinating and important shamanic tradition."
— Sacred Hoop

"Undoubtedly one of the best books on contemporary shamanism in print today. Anyone interested in a vivid first-person account of the renewal of an ancient native culture and its relevance to twenty-first-century people will find this book a must read."
— NorthwindVisions.com

"There is a feeling in this book of seriousness, of
experience . . ."
— Widdershins, Cup of Wonder Magazine

"Sarangerel includes many photographs and illustrations of the rituals and accoutrements used in ceremonies. There are many meditation techniques and mind training ceremonies included. I highly recommend Riding Windhorses to any student of shamanic studies and would-be shamans. There is practical information, which if followed carefully will allow you to awaken your own inner shaman."
— Lesley Crossingham, New Dawn, No. 114, May-June 2009