The Speaking Land: Myth and Story in Aboriginal Australia (Paperback) 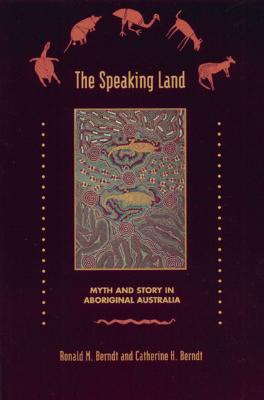 The Speaking Land: Myth and Story in Aboriginal Australia (Paperback)


Not On Our Shelves—Ships in 1-5 Days
The 195 stories collected in this first anthology of Aboriginal myth were told to anthropologists Ronald and Catherine Berndt, who spent nearly fifty years working among the Aboriginal peoples of Australia.

The Berndts developed a system of field research that allowed them entrance into a culture that has been alive for more than 100,000 years: Ronald Berndt met with male storytellers, while Catherine met with the women. The myths they collected come from the oldest collective memory of humankind, describing characters and events of the "Dreamtime"--a time that existed before the material world was formed.

The Speaking Land touches on all aspects of life: creation, natural forces, social rules, and the exotic. Stark, tinged with fantasy, sometimes bizarre, the myths chronicle the actions of the Ancestors, portraying not only beauty and wonder but also scenes of conflict: treachery and theft, jealousy and lust, greed and antagonism, injury and death. The lessons of life implicit in these stories are still reflected in the simplicity and deep spirituality of this culture.

In all of the myths collected here the land is as important as the living characters who travel it. In the Dreamtime creation, mythic, shape-changing characters moved across the countryside, leaving part of their eternal spiritual qualities in the land. Eventually, these characters and forces retreated into the living environment, where they remain today, spiritually anchored. The land still speaks to us, and The Speaking Land will help us understand its language.