Pythagoras: His Life and Teachings (Paperback) 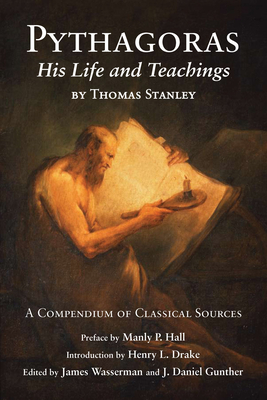 Pythagoras: His Life and Teachings (Paperback)


Not On Our Shelves—Ships in 1-5 Days
The timeless brilliance of this exhaustive survey of the best classical writers of antiquity on Pythagoras was first published in 1687 in Thomas Stanley's massive tome, The History of Philosophy. It remains as contemporary today as it was over three hundred years ago. The text of the 1687 book has been reset and modernized to make it more accessible to the modern reader. Spelling has been regularized, obsolete words not found in a modern dictionary have been replaced, and contemporary conventions of punctuation have been used. Biographical sketches of Thomas Stanley and Pythagoras by Manly Palmer Hall, founder of the Philosophical Research Society, have been included, along with a profound overview of Pythagorean philosophy by Platonic scholar Dr. Henry L. Drake. The extensive Greek language references throughout the text have been corrected and contextualized, and reset in a modern Greek font. Each quotation has been verified with the source document in Greek. An extensive annotated appendix of these classical sources is included. A complete bibliography details all the reference works utilized, and a small Glossary defines a number of terms, especially those from musical theory, which may be unfamiliar to the non-technical reader.
Thomas Stanley (1625-1678) was the first English historian of philosophy. He gained distinction during his own lifetime as a poet and a translator.
Manly P. Hall (1901-1990) founded the Philosophical Research Society in 1934. He was a prolific author and lecturer, and remains a primary exponent of the Western Mystery Tradition.
Dr. Henry L. Drake (1906-1978), a close and loyal friend of Mr. Hall, served as vice-president of the Society for nearly three decades, in addition to editing a collection of Plato's complete works.

James Wasserman is a lifelong student of esotericism. His writings include The Mystery Traditions: Secret Symbols and Sacred Art, and Aleister Crowley and the Practice of the Magical Diary. His Chronicle Books edition of The Egyptian Book of the Dead: The Book of Going Forth by Day features the fullcolor Papyrus of Ani with integrated English translation. The Templars and the Assassins: The Militia of Heaven has thus far been published in six languages. His controversial The Slaves Shall Serve: Meditations on Liberty defines political freedom as a spiritual value. His newest book is An Illustrated History of the Knights Templar. He is currently editing a series on Western occultism known as The Weiser Concise Guides. You can find him online at www.studio31.com. He lives in New York City with his wife Nancy.

J. Daniel Gunther is a life-long student of esotericism, mythology, and religion. A longtime member of A;. A;., the teaching Order established by Aleister Crowley, he is considered one of the foremost authorities in the ?eld, and serves on the editorial board of The Equinox, and acts as a consultant and advisor for numerous occult publications.