The Divine: A Play for Sarah Bernhardt (Paperback) 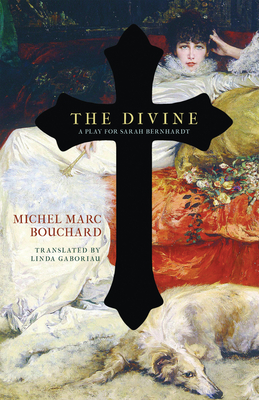 The Divine: A Play for Sarah Bernhardt (Paperback)

Quebec City, 1908. Two priests-to-be are ordered to deliver a letter to a controversial visitor to their city: the legendary French actress, Sarah Bernhardt.

As part of her long career, Bernhardt - known to her loyal fans as "The Divine" - visited Canada several times between 1880 and 1917, most often visiting Montreal, but once - just once - alighting in Quebec City. It is this singular historic visit, about which little is known, that Bouchard takes as the backdrop for his play, exploring conservative and progressive veins in competition through turn-of-the-century North America, with a focus on Quebec, that province on the verge of great change. Michaud, the son of the province's minister of finance, is a theatre lover. Talbot, on the other hand has arrived at the seminary on the very day of Bernhardt's arrival in town, he comes from a family struggling with poverty and clearly has more pressing concerns. The two are ordered to deliver a letter from the Archbishop forbidding Bernhardt to appear on stage at any point during her one and only visit to Quebec City, on the grounds that she has decided to perform a play in which Adrienne Lecovreur "sings the praises of adulterous love" and "ridicules a man of the cloth portrayed as a plotting habitu of Parisian salons." And so the stage is set for a battle for the hearts and minds of Quebeckers through these two seminarians: the powerful Catholic Church on one side, and the power of the divine Sarah Bernhardt - and the world of the theatre - on the other. The Divine was commissioned for the 2015 Shaw Festival in honour of George Bernard Shaw and everyone who loves the theatre, and in memory of Sarah Bernhardt, "the woman who dares to say everything that should be left unsaid." Cast of five women and eight men.