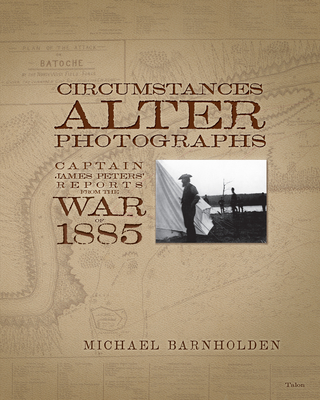 On Friday, April 24, 1885, Captain James Peters took the world's first battlefield photographs under fire at the battle of Fish Creek in the Canadian Northwest Territory of Saskatchewan. As Captain of the Royal Canadian Artillery's "A" Battery--part of the North West Field Force--he subsequently managed to expose over seventy glass plates for the duration of the battles at Duck Lake and Batoche as well, many of them again during combat with the enemy, both on the ground and on horseback. In addition to his photographic documentation of the "Northwest Rebellion" he was also a war correspondent for the Quebec Morning Chronicle. His regular dispatches, together with his images, serve as a pioneering addition to the history of war correspondents and are presented here for the first time in their entirety.

This watershed in the documentation of history was created by photographic technology, advanced to the point where "naturalist" or "detective" cameras, which came on the market in 1883, could be carried slung over the shoulder. Their faster shutter speed now allowed for hand-held photography. These cameras used coated plates that did not require preparation and could be stored for later development. Suddenly, the only restriction on any photographer was access to the action. Neglected for over 120 years, these images literally shine new light on the War of 1885--particularly the second part of the campaign against the Indians under Big Bear, Poundmaker and Miserable Man. They are frankly astonishing in both their eerily haunting visual impact and as much by the mere fact that they even still exist. Documenting the moment when the eighteen-year-old country of Canada turned away from becoming a M tis Nation by declaring war on its own people, this book refutes much of the revisionist history in John Ralston Saul's A Fair Country.
Michael BarnholdenMichael Barnholden holds a Master of Arts degree in Liberal Sciences from Simon Fraser University, and is associate director of Humanities 101 at the University of British Columbia. A member of the board of the Kootenay School of Writing, managing editor of the literary magazine West Coast LINE, Barnholden is the author of several books of poetry and non-fiction, including Reading the Riot Act (Anvil Press, 2005) and Circumstances Alter Photographs (Talonbooks 2009).