The House That Max Built (Hardcover) 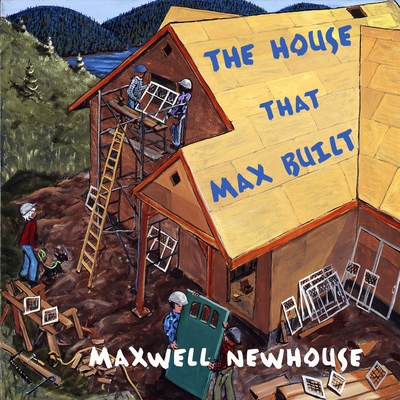 The House That Max Built (Hardcover)


Special Order—Subject to Availability
Having worked construction for many years, author and illustrator Maxwell Newhouse shows young readers step-by-step how houses are built in this captivating picture book. From drawing up the plans to excavating the site to laying the foundation, the unique and colorful paintings move through the seasons as Max builds the house of his dreams. Watch the framing crew as they build a floor frame to hold the house, raise the walls into place, and make the roof frame. See them install the windows and doors, bricklayers build the outside walls with bricks and mortar, and roofers nail the shingles into place. Follow the plumber as he puts in the water lines, the electrician as he installs the wiring, and the drywaller as he places wallboard on the inside walls. Along come the tile setter, floor layer, cabinetmaker, and painter, who all do their part to make Max’s house beautiful as his mischievous little dog romps through the pages. Finally, when the property has been landscaped with plants, trees, grass, and stones, Max moves into his beloved new home.

With a list of all the trades and a description of what they do, The House That Max Built is a must-have for any child with a natural curiosity and a passion to build things
Maxwell Newhouse is one of the country’s most accomplished folk artists. His work is exhibited in galleries across Canada. He is well known for his paintings of the Royal Canadian Mounted Police, which are gathered together for the first time in The RCMP Musical Ride. He has illustrated five books for Tundra, including Emily Carr: At the Edge of the World by Jo Ellen Bogart, Laura Secord by Janet Lunn, and, Let’s Go for a Ride, which he both wrote and illustrated and was nominated for a Governor General’s Award for illustration. He lives in Cultus Lake, British Columbia.
Praise for Let’s Go for a Ride:
“Sophisticated imagery and a confident naiveté make for a fresh and surprising ride.” — Governor General’s Award Jury

Praise for The RCMP Musical Ride:
“Newhouse has created folk art illustrations that evoke the pageantry of ‘the ride’, while filling each page with details and fun for the reader.” — Brandon Sun