Sword of Ice: And Other Tales of Valdemar (Valdemar Anthologies #1) (Mass Market) 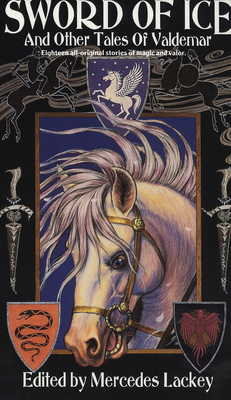 Sword of Ice: And Other Tales of Valdemar (Valdemar Anthologies #1) (Mass Market)

This is book number 1 in the Valdemar Anthologies series.

Filled with magic, intrigue, romance and adventure, Mercedes Lackey's world of Valdemar is one of the most popular domains in fantasy literature. Home to the Heralds and thier mysterious horselike Companions, the magical Tayledras Hawk-people, and of course, the powerful gryphons, Valdemar has garnered a devoted global following. Now these 17 new tales by fantasy's greatest authors are sure to add their own chapter to the history of this enchanting land.
Mercedes Lackey is a full-time writer and has published numerous novels and works of short fiction, including the best-selling Heralds Of Valdemar series. She is also a professional lyricist and a licensed wild bird rehabilitator. She lives in Oklahoma with her husband, artist Larry Dixon, and their flock of parrots.
Praise for the Valdemar anthologies:

“Fans of Lackey’s epic Valdemar series will devour this superb anthology. Of the thirteen stories included, there is no weak link—an attribute exceedingly rare in collections of this sort. Highly recommended.” —The Barnes & Noble Review

“Lackey’s delightful world of magic is inhabited by strong and believable men, women, and creatures, the most enchanting being the gryphons.” —Publishers Weekly

“Each story brings unique ideas that carry on the fantastical elements from the world created by Lackey. Fans new and old will step into a literary world that’s unlike any other and will be sucked into tales that will take them on wondrous journeys.” —RT Reviews