The Lunch Thief: A Story of Hunger, Homelessness and Friendship (Paperback) 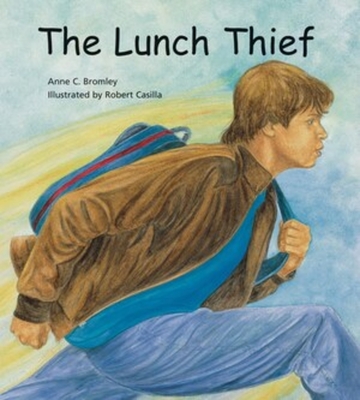 The Lunch Thief: A Story of Hunger, Homelessness and Friendship (Paperback)

Rafael is hungry—because someone stole his lunch.

The Lunch Thief can be used for curriculum centered on nonviolence and peacemaking.

His mom had packed his lunch bag with two burritos, a bag of corn chips, some carrots, and an apple. Once a week she tucks in a slice of her special lemon pound cake. Rafael saw Kevin, a new kid in his class, sneak his lunch bag from underneath his desk and tuck it in his backpack. But how can he do something about the theft without picking a fight? Inspired by his mother's advice to “Use your mouth before your fists,” Rafael bides his time, but other kids' lunches are disappearing,too. On an errand with his mom, Rafael sees Kevin carrying a bundle of laundry into a motel room, and his mom tells him Kevin's family might be one of the families who lost their homes in the recent wildfires. Rafael rethinks his anger. The next day, instead of accusing Kevin, Rafael invites him to share his lunch, letting Kevin know he's been caught, but offering friendship as well as lunch.

Anne C. Bromley lives in Encinitas, California, with her husband Rod. She is a business-writing instructor and consultant who teaches seminars throughout southern California. She has also taught creative-writing workshops for children and for adults. Anne has published two books of poetry with Carnegie Mellon University Press. She has both Master of Fine Arts and Master of Education degrees. Anne enjoys hiking in the high desert of Joshua Tree National Park, strolling along Swami's Beach at sunset, and observing the wildlife of her beach-town neighborhood—feral cats, raccoons,opossums, an occasional coyote, and surfers. Inspired by her experiences as a substitute teacher in northern San Diego County, The Lunch Thief is her first children's book.

Robert Casilla, born in Jersey City, New Jersey, to parents from Puerto Rico, received a Bachelor of Fine Arts degree from the School of Visual Arts in New York City. He works from his home studio in New Fairfield, Connecticut, where he lives with his wife and two children. Robert has illustrated many multicultural children's books such as The Little Painter of Sabana Grande, Jalapeño Bagels, The Legend of Mexicatl, and Con Mi Hermano/With My Brother. He has also illustrated a number of biographies, including ones about Martin Luther King, Jr., John F. Kennedy, Eleanor Roosevelt, Rosa Parks, Jackie Robinson, Jesse Owens, and Simón Bolívar.
The boy in The Lunch Thief has a real problem. He is homeless and lunchless where others have plenty. This is a story of sharing and caring and Anne C. Bromley and illustrator Robert Casilla handle it with understanding and sympathy.
— Eve Bunting, author of Fly Away Home, December, and many other children’s books

Faced with a challenging situation when his lunch was stolen, Rafael listens to his instincts and follows his mother’s valuable advice that ‘fighting is for cowards’ and ‘use your mouth before your fists.’ The Lunch Thief, by Anne C. Bromley, is a moving and thoughtful real-life story of how Rafael chose not to respond impulsively, but took the time to think through his actions in order to resolve the problem in a nonjudgmental way. It’s a heartwarming book that helps children see the other side of every story.
— Thom Ronk, Teaching Tolerance

Hunger is hidden. Most of us don't see it, don't hear about it, don't think about it because it's such a shameful thing for those experiencing it. But hunger is growing in America, and its worst victims are the children who must go without food every day, or who are fed empty, sweet calories instead of a nutritious meal because those calories are cheaper than good food. The Lunch Thief brings us a gentle reminder of what hunger can drive even children to do—and of the kindness and mercy that must be our response.
— Naomi Schalit, authorof the award-winning newspaper series “For I Was Hungry”