Finding the Speed of Light: The 1676 Discovery that Dazzled the World (The History Makers Series) (Hardcover) 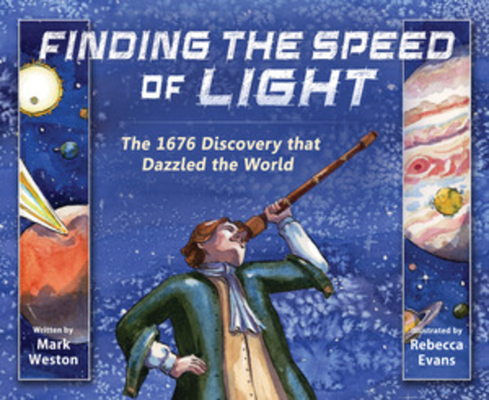 Finding the Speed of Light: The 1676 Discovery that Dazzled the World (The History Makers Series) (Hardcover)

More than two centuries before Einstein, using a crude telescope and a mechanical timepiece, Danish astronomer Ole Romer measured the speed of light with astounding accuracy. How was he able to do this when most scientists didn’t even believe that light traveled? Like many paradigm-shattering discoveries, Romer’s was accidental. Night after night he was timing the disappearance and reappearance of Jupiter’s moon Io behind the huge, distant planet. Eventually he realized that the discrepancies in his measurements could have only one explanation: Light had a speed, and it took longer to reach Earth when Earth was farther from Jupiter. All he needed then to calculate light’s speed was some fancy geometry.

MARK WESTON graduated from Brown University with a B.A. in History; studied for a year at the London School of Economics; and earned a law degree from the University of Texas. He has been a lawyer for ABC Television and a journalist for ABC News. In 1991, Mark won enough money on TV’s Jeopardy! to start a company that makes geographical jigsaw puzzles for children, which he sold after three years. His history books include Giants of Japan and Prophets and Princes: Saudi Arabia from Muhammad to the Present. His children’s books include Honda: The Boy Who Dreamed of Cars.

REBECCA EVANS worked for nine years as an artist and designer before returning to her first love: children’s book illustration and writing. Her children’s books include Someday I’ll Fly; Friends in Fur Coats; The Good Things; The Shopkeeper’s Bear; Naughty Nana; Amhale in South Africa; Mei Ling in China; Tiffany in New York; Masterpiece Robot; and Finding the Speed of Light. She lives in Maryland with her husband and four young children, shares her love of literature and art regularly at elementary schools, teaches art at the Chesapeake Center for the Creative Arts, and works from her home studio whenever time permits. Rebecca’s own boundless imagination enjoys free reign at www.rebeccaevans.net

How the observation of a small anomaly in a distant moon's orbit led to a discovery of, literally, astronomical significance. Weston spins thin historical records into an account of the career of 17th-century Danish astronomer Ole Romer from schoolboy days through nights spent watching the skies through a self-built telescope at the court of Louis XIV to final years as a renowned scientist (and police chief). Noticing that Jupiter's moon Io seemed to speed up and slow down on a regular schedule as it passed behind its planet, Romer not only concluded that light did not propagate instantaneously (a radical notion then), but, using the relatively crude clocks and other instruments of the time, came up with a wrong but close estimate of its speed. Along with retracing Romer's line of reasoning, the author explains how other researchers of the time and later roughed out the distances between major members of the solar system and refined those measurements over time, then closes with nods to Einstein, astronomical distances, and light's truly mind-bending pace. Evans tucks diagrams and mathematical calculations as well as banter and fanciful details into her lighthearted cartoon illustrations, wedging single and sequential panels of Romer and others at work into views of starscapes and planetary surfaces. Human figures in the art are white and predominantly male. A significant, unjustly obscure highlight from modern science's early days. (timeline) (Informational picture book. 8-12)

I really liked reading Finding the Speed of Light because it was educational. I loved that it was kind of like a comic book, with speech balloons. This made it fun to read. I also loved the illustrations. I would recommend Finding the Speed of Light: The 1676 Discovery that Dazzled the World to kids who wonder about science and astronomy and who want to learn about the speed of light.

The unique combination of Weston’s writing style and Evans’ colorful, cartoon-like illustrations make this book a delight. This would be a great discussion starter for young scientists as they explore this text and note the process and missteps that go along with scientific investigation and inquiry.   Recommended