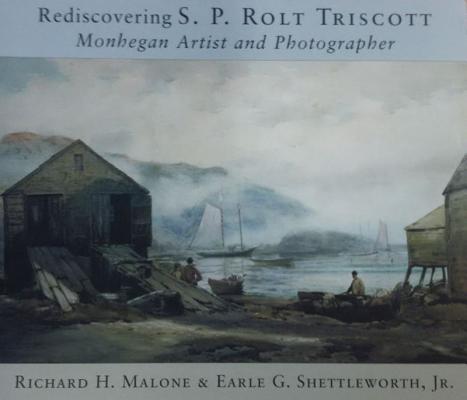 Richard Malone’s writing complements Triscott’s masterful landscapes and glass plate photos, many of which are paired to show the same Monhegan vistas.

Published with The Monhegan Museum

Born in Pittsburgh, Pennsylvania, Richard H. Malone (1930-1992) graduated from Pennsylvania State University, served as an officer in the United States Navy, and pursued a business career in Maine.  During his retirement, Mr. Malone collected paintings by S. P. Rolt Triscott and conducted extensive research on his life, which resulted in the 1979 biographical essay included in this book.  In 1983 Mr. Malone was the guest curator for "Monhegan: A Century of Art," an exhibition at the William A. Farnsworth Library and Art Museum in Rockland, Maine.

Earle G. Shettleworth Jr. was appointed to the first board of the Maine Historic Preservation Commission in 1971 and has served as director of the commission since 1976 and as Maine State Historian since 2004.

Collectors,
dealers, and museums are taking notice of Triscott’s long-forgotten
watercolors, appreciating not only the exceptional technique but also his
sensitive portrayal of land and sea.
— Edward L. Deci, Monhegan Museum Association

Triscott’s paintings are strong, compelling, and unique for
his time.
— Bangor Daily News