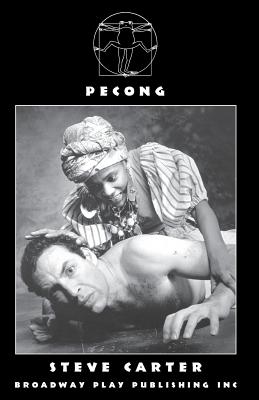 "Victory Gardens Theater did not simply present a world premiere of a new play on Thursday night. It conjured a new life for a myth that is more than 2,000 years old. And it did so with such stunning and completely realized theatricality that it seemed as if all the talent involved in the project has suddenly ripened and burst apart.
The play is called PECONG. And although at first its Caribbean island setting seems far from the ancient Greece as a globe will permit, it turns out to be not just one of the most astonishingly powerful retellings of the Medea story, but one of the most faithful. In moving this classic tale of sexual possession and bloody revenge to another continent, playwright Steve Carter has rediscovered its meaning.
Sex and power are the focus of PECONG, and the struggles come in all varieties. At the center there is the battle between man and woman in the ferocious relationship of Mediyah (the Medea character), the sorceress, and Jason Allcock, the shallow womanizer whom she falls madly in love with and cedes all her power to, only to be crassly dumped. Hell hath no fury like this woman scorned.
But there are also wars among women, between brother and sister, between those of light and dark skin tones and, of course, among men. (In the Carnival scene a 'pecong, ' or verbal battle of insults hurled in rhymed verse, is played out in great style by Mediyah's brother, dressed as a rooster, and her lover, dressed as a ram.)
PECONG is Carter's most ambitious and beautifully written play to date--full of humor, passion, high drama and low comedy."
Hedy Weiss, Chicago Sun-Times