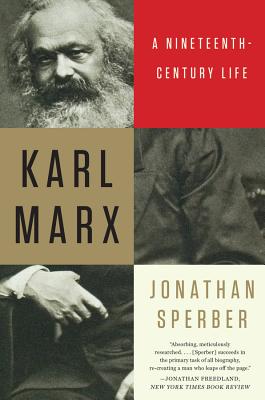 Finalist for the Pulitzer Prize (Biography)

In this magisterial biography of Karl Marx, “likely to be definitive for many years to come” (John Gray, New York Review of Books), historian Jonathan Sperber creates a meticulously researched and multilayered portrait of both the man and the revolutionary times in which he lived. Based on unprecedented access to the recently opened archives of Marx’s and Engels’s complete writings, Karl Marx: A Nineteenth-Century Life provides a historical context for the personal story of one of the most influential and controversial political philosophers in Western history. By removing Marx from the ideological conflicts of the twentieth century that colored his legacy and placing him within “the society and intellectual currents of the nineteenth century” (Ian Kershaw), Sperber is able to present a full portrait of Marx as neither a soothsaying prophet of the modern world nor the author of its darkest atrocities. This major biography fundamentally reshapes our understanding of a towering historical figure.

Jonathan Sperber, the author of The European Revolutions, 1848–1851, is the Curators’ Professor of History at the University of Missouri. He has written extensively on the social and political history of nineteenth-century Europe.
Sperber prefers a firmly historicist approach, and attempts, by viewing his subject purely in the context of the times, to show us a quintessentially ‘nineteenth-century life'…Sperber’s rigor…yields gems.
— New Yorker

Starred review. This superb, readable biography of the most controversial political and economic thinker of the last two centuries achieves what scholars have been hard-pressed to deliver in recent decades: a study of Marx that avoids cold war, ideological, and partisan commitments and arguments. A major work, this is likely to be the standard biography of Marx for many years.
— Publishers Weekly

By locating Marx squarely in the society and intellectual currents of the nineteenth century, rather than interpreting him in the light of twentieth-century history, Jonathan Sperber’s excellent biography succeeds splendidly in reshaping our image of the man and his thought.
— Ian Kershaw, author of Hitler: A Biography

Brilliant, original, and beautifully written, Jonathan Sperber’s biography of Marx dazzles. Neither a prophet nor a purveyor of a political system gone awry, Marx emerges in these pages as a man struggling, personally and intellectually, with the profound issues of his own time. With insight and erudition, Sperber weaves Marx’s life and time seamlessly together, and gives us the first deeply researched, engaging biography of Marx in more than three decades
— Helmut Smith, author of The Butcher’s Tale: Murder and Anti-Semitism in a German Town

The first significant Marx biography in decades… Sperber details graphically the often-times scurrilous intrigues and competitive struggles, in doing so developing a panorama of a European-wide network of artisans, revolutionaries and intellectuals… In careful detail, [he] reconstructs the genesis of Marx’s works, the influences of David Ricardo and Adam Smith on Marx’s political economy, as well as his fascination with Darwin’s theories.
— Alexander Cammann, author of Die Zeit

Karl Marx is our contemporary, interpreted anew by each generation—and that is as it should be. What Jonathan Sperber has done, and done wonderfully well, is return Marx to his own time. He makes us look again at the writings, through nineteenth-century eyes, and gives a vivid account of Marx's often difficult personal circumstances. Deeply researched but highly readable, this is a biography to savor.
— David Blackbourn, author of The Conquest of Nature: Water, Landscape, and the Making of Modern Germany