Gifted Earth: The Ethnobotany of the Quinault and Neighboring Tribes (Paperback) 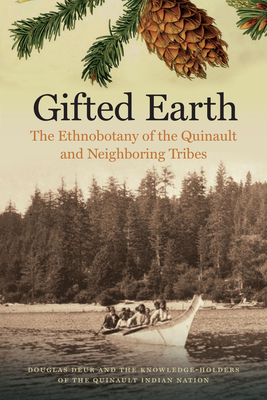 Gifted Earth: The Ethnobotany of the Quinault and Neighboring Tribes (Paperback)

Gifted Earth features traditional Native American plant knowledge, detailing the use of plants for food, medicines, and materials. It presents a rich and living tradition of plant use within the Quinault Indian Nation in a volume collaboratively developed and endorsed by that tribe.

The Quinault Reservation on the Olympic Peninsula of Washington state is a diverse tribal community, embodying the traditional knowledge of tribes along the entire Pacific Northwest coast. Its membership consists of descendants of many tribes—from the northwestern Olympic Peninsula to the northern Oregon coast—including the Quinault, but also many others who were relocated to the reservation in the nineteenth and early twentieth centuries. Individuals descended from these tribal communities, including Chinook, Chehalis, Hoh, Quileute, Queets, Cowlitz, Tillamook, Clatsop, and others, have contributed to Gifted Earth, giving it remarkable breadth and representation.

A celebration of enduring Native American knowledge, this book will help non-specialists as they discover the potential of the region’s wild plants, learning how to identify, gather, and use many of the plants that they encounter in the Northwestern landscape. Part ethnobotanical guide and part “how-to” manual, Gifted Earth also prepares plant users for the minor hazards and pitfalls that accompany their quest—from how to avoid accidentally eating a bug hidden within a salal berry to how to prevent blisters when peeling the tender stalks of cow parsnip.

As beautiful as it is informative, Gifted Earth sets the standard for a new generation of ethnobotanical guides informed by the values, vision, and voice of Native American communities eager to promote a sustainable, balanced relationship between plant users and the rich plant communities of traditional tribal lands.
Douglas Deur is an associate research professor of anthropology at Portland State University and an adjunct professor of environmental studies at the University of Victoria. He is the author of Pacific Northwest Foraging and many other writings that explore the traditions, values, and ecological logic of Native American plant use. This volume is a product of his long-term collaboration with the Quinault Indian Nation to record plant knowledge of tribal members in order to guide modern land-use planning, ensure that this knowledge is passed on to future generations of tribal members, and share as appropriate with the outside world.