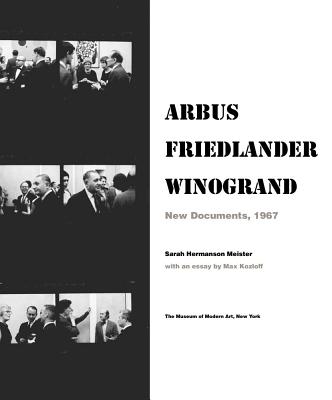 In the past decade a new generation of photographers has directed the documentary approach toward more personal ends. Their aim has been not to reform life, but to know it. --John Szarkowski

In 1967, The Museum of Modern Art presented New Documents, a landmark exhibition organized by John Szarkowski that brought together a selection of works by three photographers whose individual achievements signaled the artistic potential for the medium in the 1960s and beyond: Diane Arbus, Lee Friedlander and Garry Winogrand.

Though largely unknown at the time, these three photographers are now universally acknowledged as artists of singular talent within the history of photography. The exhibition articulated a profound shift in the landscape of 20th-century photography, and interest in the exhibition has only continued to expand. Yet, until now, there has been no publication that captures its content. Published in celebration of the 50th anniversary of the exhibition, Arbus Friedlander Winogrand features full-page reproductions of the 94 photographs included in the exhibition, along with Szarkowski's original wall text, press release, installation views and an abundance of archival material. Essays by curator Sarah Hermanson Meister and critic Max Kozloff, who originally reviewed the exhibition for The Nation in 1967, critically situate the exhibition and its reception, and examine its lasting influence on the field of photography.