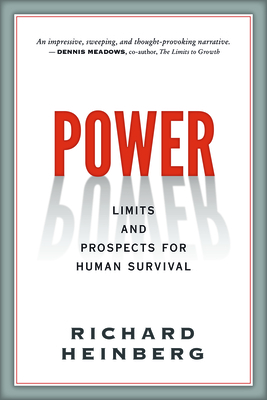 Impeccably researched and masterfully written, this book explains how and why humanity is driving itself off the cliff. -- Dahr Jamail, author, The End of Ice

Weaving together findings from a wide range of disciplines, Power traces how four key elements developed to give humans extraordinary power: tool making ability, language, social complexity, and the ability to harness energy sources ― most significantly, fossil fuels. It asks whether we have, at this point, overpowered natural and social systems, and if we have, what we can do about it.

Has Homo sapiens -- one species among millions -- become powerful enough to threaten a mass extinction and disrupt the Earth's climate? Why have we developed so many ways of oppressing one another? Can we change our relationship with power to avert ecological catastrophe, reduce social inequality, and stave off collapse?

These questions -- and their answers -- will determine our fate.

Richard Heinberg is the author of thirteen previous books including The Party's Over, Powerdown, Peak Everything, and The End of Growth. He is Senior Fellow of the Post Carbon Institute and is widely regarded as one of the world's most effective communicators of the urgent need to transition away from fossil fuels. Heinberg has given hundreds of lectures on our energy future to audiences around the world. He has been published in Nature and other journals and has been featured in many television and theatrical documentaries. He lives in Santa Rosa, CA.