A Kind of Magic: The Kaleidoscopic World of Luke Edward Hall (Hardcover) 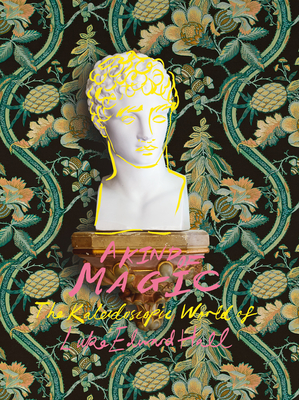 A Kind of Magic: The Kaleidoscopic World of Luke Edward Hall (Hardcover)


Not On Our Shelves—Ships in 1-5 Days
An aesthetic cornucopia of interior design inspiration and artistic passion from Luke Edward Hall, one of today’s most colorful and whimsical creative icons

This flamboyant, idiosyncratic volume oozes young English artist Luke Edward Hall’s trademark whimsical, eclectic style. His Cotswolds cottage and studio and London apartment exist as creative laboratories, forming the backdrop to his interior, product, and fashion design, as well as his painting, drawing, and writing. This exciting new book explores Hall’s romantic, colorful universe through his homes and workspaces, drawing on his myriad influences, from local mythology and folklore to 1980s pop music and all things Baroque. Divided into three sections—Country, London, and Studio—and featuring photographs by Hall’s close friend and collaborator Billal Taright, the book showcases Hall’s striking interior design style, together with his artwork and an assortment of short essays on his passions, from flowers and gardens to cooking and clothes. Coupled with vintage photographs and drawings of noteworthy personalities and locations, plus collage-style collections of Hall’s own memorabilia, this book featuring a transparent illustrated dust jacket, will enchant Hall’s legion of fans as well as art and design enthusiasts around the world.
Luke Edward Hall is an English artist, designer, and FT Weekend columnist. His philosophy is shaped by his love of storytelling and fantasy, and his colorful work is often inspired by history, filtered through a lens of irreverent romanticism. Since founding his studio in 2015, he has worked on a range of commissions from interior design and fashion projects to murals and illustration. His first book, Greco Disco, was published in 2019, and in 2020 his first large interior design project opened in Paris: Hotel Les Deux Gares—a 33-room hotel and bistro. Billal Taright is a London-based photographer renowned for his striking interiors, fashion, still life, and portraiture. Successfully straddling the interface of art and commercial photography, his work has been seen in Harper’s  Bazaar, Vogue, Tatler, Cabana, and AD, with fashion collaborations including Hermès, Diane von Furstenburg, and many more.