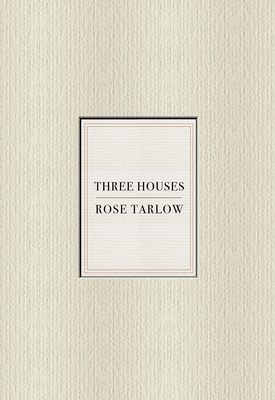 Inspired by memories of her East Coast childhood home, Windrift, lost in a fire more than 50 years ago, Rose Tarlow showcases three of her family houses in this deluxe slipcased volume. Often referred to as “the decorator’s decorator,” Tarlow has a distinctive style that has won her numerous international accolades, and her own houses are the embodiment of her design philosophy, exuding charming eccentricity and uncompromising quality. Featuring her family homes in Stone Canyon and Santa Barbara, California, and Provence, France, Three Houses presents Tarlow’s own personal archive—a treasure trove of precious memories and design inspiration for generations to come.

The book will be delivered in a protective disposable slipcase.

Rose Tarlow is an internationally acclaimed interior designer, antiquarian, designer of fine furniture and fabrics, and author. Her life and work have been featured in nearly every important publication on architecture, interior design, and style. A member of the Interior Design Hall of Fame since 1995, she was named to Elle Décor’s A-List as a Grand Master of Design in 2010, and became a charter member of the AD100 Hall of Fame in 2018. Her company, Rose Tarlow Melrose House, has locations in Los Angeles and New York, with her furniture and fabrics featured in 11 additional showrooms across the country and international outlets in London, Melbourne, and Sydney. François Halard, Miguel Flores‑Vianna, and Fernando and Gerardo Montiel Klint are renowned interiors photographers whose work can be seen in magazines worldwide.