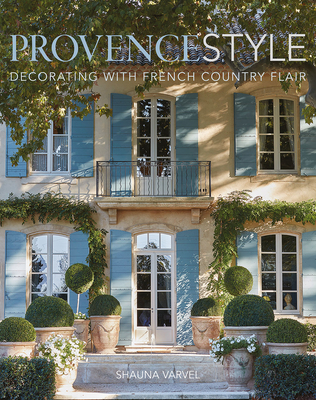 
On Our Shelves Now at:
An intimate tour of quintessential Provencal style, featuring chic homes and interior details inspired by this picturesque region

Thirty years after the publication of Peter Mayle’s bestselling memoir A Year in Provence, the sun-drenched southern French region continues to excite home decorators with its combination of rustic charm, elegant details, and historical influences. Provence Style showcases the best of the region, with Shauna Varvel’s quintessential 18th-century Rhône valley farmhouse—Le Mas des Poiriers—as its centerpiece. Named for the working pear orchard on the grounds, the property was reimagined by noted local architect Alexandre Lafourcade, who transformed a rough structure into a luxurious expression of the Provençal aesthetic, referencing historical influences, rural traditions, and Parisian taste.
Set amid a garden of allées, arbors, and terraces designed by the architect’s mother, renowned landscape designer Dominique Lafourcade, this exemplar of Provençal style is the starting point for exploring the region’s characteristic interior details and exterior features. The book includes chapters on the public spaces of the home, from entrances to living rooms, the private realm of bedrooms and bathrooms, and outdoor areas including patios and kitchen gardens, transporting the reader on a captivating stylistic journey.

Shauna Varvel began her career in public relations with Estée Lauder in New York and Tokyo. After years of renting homes in Provence, Varvel and her family finally took on the renovation of a 200-year-old farmhouse outside Avignon, France. The project has been celebrated by numerous publications, including Veranda, Town & Country, and Fortune magazines. Alexandra Black is the author of Living in Cuba, Tuscan Elements, Ski Style, The Japanese House, Dusk Till Dawn, and The Fashion Book, and has contributed to Elle, Vogue Living, and Gourmet Traveller.
“Beloved around the world, Provence’s spirit is humbled and pure. In a visual compendium of this region’s most charming interiors, readers find inspiration for decorating with the tastes of the French countryside. . . . Using her luxurious dwelling as an archetype and other noted interiors as visual examples, the author depicts how the region’s iconic style balances rusticity and refinement.”
— Victoria

“When Shauna Varvel and her family bought an 18th-century estate on a 65-acre pear farm on the Rhône River, their lives turned into a romantic fantasy fit for a Hollywood movie.”
— New York Post

“Provence Style: Decorating with French Country Flair includes intimate tours of chic homes and their interior details that are inspired by the picturesque region they reside in. It also includes chapters on the public spaces in Varvel’s home. . . transporting the reader on a captivating stylistic journey.”
— Southern Home

“Using Shauna Varvel’s 18th-century Rhône valley farmhouse—Le May des Poiriers—as a starting point, readers will be invited on an intimate tour of some of the most beautiful space in France’s sun-drenched region of Provence.”
— House Beautiful