Is That a Fish in Your Ear?: Translation and the Meaning of Everything (Paperback) 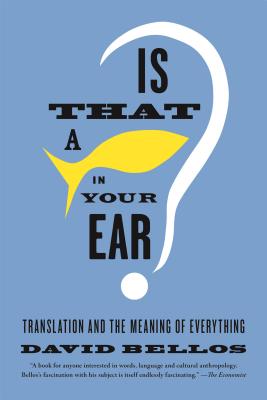 Is That a Fish in Your Ear?: Translation and the Meaning of Everything (Paperback)

People speak different languages, and always have. The Ancient Greeks took no notice of anything unless it was said in Greek; the Romans made everyone speak Latin; and in India, people learned their neighbors' languages—as did many ordinary Europeans in times past (Christopher Columbus knew Italian, Portuguese, and Castilian Spanish as well as the classical languages). But today, we all use translation to cope with the diversity of languages. Without translation there would be no world news, not much of a reading list in any subject at college, no repair manuals for cars or planes; we wouldn't even be able to put together flat-pack furniture.

Is That a Fish in Your Ear? ranges across the whole of human experience, from foreign films to philosophy, to show why translation is at the heart of what we do and who we are. Among many other things, David Bellos asks: What's the difference between translating unprepared natural speech and translating Madame Bovary? How do you translate a joke? What's the difference between a native tongue and a learned one? Can you translate between any pair of languages, or only between some? What really goes on when world leaders speak at the UN? Can machines ever replace human translators, and if not, why?

But the biggest question Bellos asks is this: How do we ever really know that we've understood what anybody else says—in our own language or in another? Surprising, witty, and written with great joie de vivre, this book is all about how we comprehend other people and shows us how, ultimately, translation is another name for the human condition.

David Bellos is the director of the Program in Translation and Intercultural Communication at Princeton University, where he is also a professor of French and comparative literature. He has won many awards for his translations of Georges Perec, Ismail Kadare, and others, including the Man Booker International Translator’s Award. He also received the Prix Goncourt for George Perec: A Life in Words. He is the author of the book Is That a Fish in Your Ear? Translation and the Meaning of Everything.

“[Bellos] offers an anthropology of translation acts. But through this anthropology a much grander project emerges. The old theories were elegiac, stately; they were very much severe. Bellos is practical, and sprightly. He is unseduced by elegy. And this is because he is onto something new . . . Dazzlingly inventive.” —Adam Thirlwell, The New York Times

“In the guise of a book about translation this is a richly original cultural history . . . A book for anyone interested in words, language and cultural anthropology. Mr Bellos's fascination with his subject is itself endlessly fascinating.” —The Economist

“For anyone with a passing interest in language this work is enthralling . . . A wonderful celebration of the sheer diversity of language and the place it occupies in human endeavour. Conducted by a man who clearly knows his stuff, it is a whirlwind tour round the highways and byways of translation in all its glorious forms, from literary fiction to car repair manuals, from the Nuremberg trials to decoding at Bletchley Park.” —The Scotsman

“Bellos has numerous paradoxes, anecdotes and witty solutions . . . his insights are thought provoking, paradoxical and a brilliant exposition of mankind's attempts to deal with the Babel of global communication.” —Michael Binyon, The Times

“This informed book props open the door to the idea of translation with pop culture . . . This broad-ranging book reads like a survey course in translation, providing a look at its history, detractors, challenges, future--if computers are the future--and current practice, both spoken and written . . . The result is arresting.” —Carolyn Kellogg, Los Angeles Times

“David Bellos writes like a person who chooses his words not only carefully but also confidently and pragmatically. Translation is a challenging enterprise, but one he embraces vigorously and without the gloomy pessimism that leads some to declare that it's impossible . . . Rich, often playful chapters.” —Jim Higgins, Milwaukee Journal Sentinel

“[A] witty, erudite exploration . . . [Bellos] delights in [translation's] chequered past and its contemporary ubiquity . . . He would like us to do more of it. With the encouragement of this book, we might even begin to enjoy it.” —Maureen Freely, Sunday Telegraph

“Is That A Fish In Your Ear? is spiced with good and provocative things. At once erudite and unpretentious . . . [it is a] scintillating bouillabaisse.” —Frederic Raphael, Literary Review

“Forget the fish--it's David Bellos you want in your ear when the talk is about translation. Bellos dispels many of the gloomy truisms of the trade and reminds us what an infinitely flexible instrument the English language (or any language) is. Sparkling, independent-minded analysis of everything from Nabokov's insecurities to Google Translate's felicities fuels a tender--even romantic--account of our relationship with words.” —NATASHA WIMMER, translator of Roberto Bolaño's Savage Detectives and 2666

“A disquisition of remarkable freshness on language, speech and translation. In short, punchy, instructive chapters that take in such things as linguistics, philosophy, dictionaries, machine translation, Bible translations, international law, the Nuremberg trials, the European Union and the rise of simultaneous interpreting . . . I could say anyone with an interest in translation should read Is That a Fish, but there wouldn't be very much point; instead, anyone with no interest in translation, please read David Bellos's brilliant book” —Michael Hofmann, The Guardian

“Bellos has adopted a radically different approach: as his Hitchhikery title suggests, he has set out to make it fun . . . Is That a Fish in Your Ear? is essential reading for anyone with even a vague interest in language and translation--in short, it is a triumph.” —Shaun Whiteside, The Independent

“Written by an award-winning translator and professor of comparative literature, this book is informed by considerable culture and an original, probing intelligence with a mostly light touch--the title riffs off of Douglas Adams's The Hitchhiker's Guide to the Galaxy, whose babel fish, when inserted in one's ear, could translate any imaginable language. If only it were that easy . . . It is a breeze to get lost in translation, and for this reason Bellos cannily exclaims, ‘We should do more of it.'” —Publishers Weekly (starred review)