Syria Speaks: Art and Culture from the Frontline (Paperback) 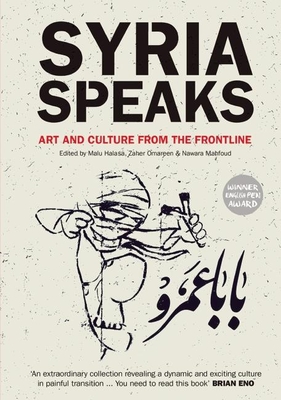 Syria Speaks: Art and Culture from the Frontline (Paperback)


Special Order—Subject to Availability
In Syria, culture has become a critical line of defence
against tyranny. Syria Speaks is a celebration of a people determined to
reclaim their dignity, freedom and self-expression. It
showcases the work of over fifty artists and writers who
are challenging the culture of violence in Syria. Their
literature, poems and songs, cartoons, political posters
and photographs document and interpret the momentous
changes that have shifted the frame of reality so drastically
in Syria. Moving and inspiring, Syria Speaks is testament to the
courage, creativity and imagination of the Syrian people. A unique anthology providing a window into Syrian art and
writing since the uprising. Contributors include
internationally renowned artists and writers, such as
Ali Ferzat, Samar Yazbek, Khaled Khalifa and Robin Yassin-Kassab. The book includes 108 colour illustrations.

Malu Halasa: Malu Halasa is an editor and writer based in London. Her books include The Secret Life of Syrian Lingerie: Intimacy and Design(Chronicle, 2008), with Rana Salam. She co-curated three exhibitions of Syria's art of resistance in 2012-13 in Amsterdam, Copenhagen and London. Zaher Omareen: Zaher Omareen is a Syrian writer, who has worked on independent cultural initiatives in Syria and Britain. He is a PhD candidate in Contemporary Documentary Cinema and New Media at Goldsmiths College, London. Nawara Mahfoud: Nawara Mahfoud is a Syrian freelance journalist who has worked for the New York Times. She blogs for the New Yorker's website, among other publications. She was a co-curator of the Culture in Defiance exhibition in Amsterdam, Copenhagen and London.