How to Teach Classics to Your Dog: A Quirky Introduction to the Ancient Greeks and Romans (Paperback) 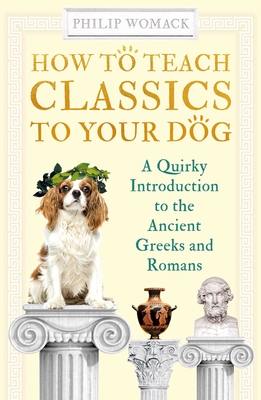 How to Teach Classics to Your Dog: A Quirky Introduction to the Ancient Greeks and Romans (Paperback)


Not On Our Shelves—Ships in 1-5 Days
‘Immensely informative, wrapped in an engagingly casual tone, complemented by more than a dash of the bizarre. You’d be barking to miss it.’ Professor Michael Scott

Can you tell your Odysseus from your Oedipus?

In this unique introduction, Philip Womack leads his beloved lurcher Una (and us) on a fleet-footed odyssey through the classical world. From Aeneas to Cerberus to Polydorus, you’ll learn about the world of the Ancient Greeks and Romans and, with a bit of luck, you’ll be able to pass it on to your dog. But maybe best leave out that story of the hounds who tore their very own master limb from limb…
Philip Womack is the author of several critically acclaimed fantasy novels for children. He read Classics and English at Oriel College, Oxford, and has taught Latin and Greek to a wide variety of students around the world. His most recent children’s book, The Arrow of Apollo, tells the stories of the children of the heroes Aeneas and Orestes. He lives in London with his wife, three children, and lurcher.
‘The strength of Womack’s book lies in the enthusiasm with which its author lays on the plate a vast range of material for dog and man… at any moment Brenda Hale, Donna Tartt, David Bowie, Molesworth, Stephen Fry or a reference to an obscure scholarly article… might leap from the page… There’s plenty here, then, to catch the attention and arouse the interest of the curious.’
— Literary Review

‘Engaging and funny and clever. Written with the verve of a novelist and the insights of a scholar. Illuminates the pleasures and relevance of the Classics today.’
— Dr Harry Sidebottom, Oxford don and author of the bestselling Warrior of Rome series

‘Philip’s whimsical tale of classical chats with his dog offers a new kind of introduction to the ancient world: immensely informative, wrapped in an engagingly casual tone, complemented by more than a dash of the bizarre. You’d be barking to miss it.’
— Professor Michael Scott, Academic, Author and Broadcaster

‘Mirabile dictu! Philip Womack and Una – his optima canis – are tremendous companions in their journey round the classical world. The ultimate vademecum…’
— Harry Mount, author of Amo, Amas, Amat… and All That

‘Una’s personality shines through and Womack’s enthusiasm is infectious.’
— Wunderdog

'Lively and informative.'
— Classics For All