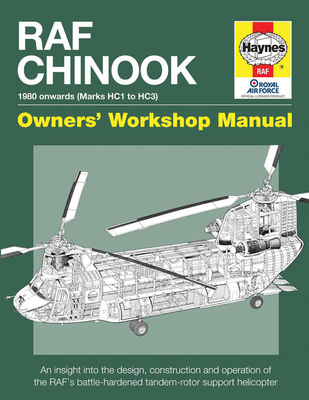 The RAF's rugged twin-rotor Chinook support helicopter has been involved in most of the UK's military operations stretching back to the Falklands Conflict, Northern Ireland and in both Gulf Wars, to peacekeeping in Bosnia, operations in Kosovo, the evacuation of Sierra Leone, and most recently its high profile missions in Afghanistan. Author Chris McNab has been given full access by the RAF to its Chinook helicopters and crews to give an unprecedented insight into their operation and maintenance, fully illustrated with a stunning selection of photographs and technical drawings.

Chris McNab specializes in military history and military technology. He has published more than 100 books, including the Haynes Kubelwagen/Schwimmwagen Manual, Roman Soldier Operations Manual, Dreadnought Battleship, Siege Warfare, Falklands War, and the RAF Chinook Manual. Chris has also written extensively for major encyclopedia series, magazines and newspapers, and has made TV appearances as an expert commentator for Discover, Sky and History channels.