Happy Healthy Sober: Ditch the Booze and Take Control of Your Life (Paperback) 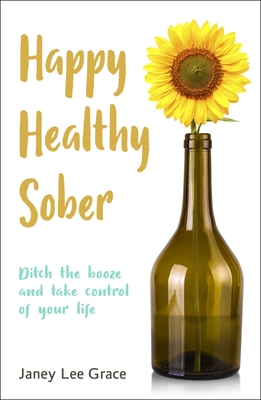 Happy Healthy Sober: Ditch the Booze and Take Control of Your Life (Paperback)


On Our Shelves Now at:
Janey Lee Grace, presenter and wellbeing expert explains the power of choosing to be free from alcohol. This book will resonate with people who aren't at rock bottom but want to be as healthy and happy as possible, they just don't realize they were 'gray-area drinkers' and that life is so much better without the booze

Much of Janey's life and career has been with the mission of improving people's health simply by making the right choices - choices that are sometimes hidden from us by the rip rig and panic of 21st century life. For many people, quitting the alcohol habit is the missing piece of their holistic health jigsaw - and could be a new chapter in their path to being happy, healthy and sober.

The thirty day 'challenge' support the reader through the initial phase of sobriety, and then gives extensive tips on all aspects of holistic wellbeing, from nutrition, fitness, mindset, spirituality and self-care.
Janey Lee Grace is well known for her appearances on Steve Wright in the Afternoon - The Big Show on BBC Radio 2, (9 million listeners) and having a top ten hit record in the 90's with Cola Boy (Seven Ways To Love), touring the world as a backing singer with many stars including George Michael and Wham, Kim Wilde, and Boy George. She is an Amazon Number One best-selling author of Imperfectly Natural Woman. Janey runs the hugely successful health and wellbeing website imperfectlynatural.com and has been voted Number One in 'Who's Who' in Natural Beauty Industry yearbook for three consecutive years. Janey's most recent TV appearances were on Good Morning Britain and Celebrity Antiques Road Trip, and has made regular contributions on many shows including The Wright Stuff, BBC Breakfast and Sky TV Entertainment news. In 2018 Janey decided to ditch the drink and quickly realised that sobriety was the missing piece of the 'holistic health jigsaw' She hosts Alcohol Free Life Podcast and runs The Sober Club (www.thesoberclub.com).